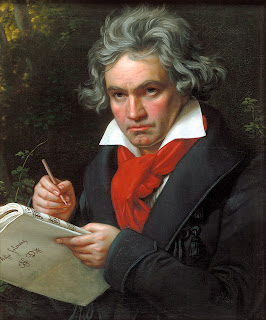 [Completing our trilogy of Beethoven postings, this is a reprint of a compilation by Eric Wagner originally posted in January 2011. See also RAW's essay, "Beethoven as Information," from the Illuminati Papers. -- The Mgt.]

I. As for music – where did we first hear it, who sang or hummed to
us, and against what part of her body were we held? - Prometheus
Rising (revised edition), pg. 48.

II. We are not talking about mere increase in linear IQ – third-
circuit semantic cleverness. We are talking of also the kinds of
right-brain intelligence that Nicholl acquired from Jungian
neurogenetic research and Gurdjieff’s meta-programming techniques. We
are talking of say, Beethoven’s intelligence, which so disturbed
Lenin, who could not bear to listen to the Appassionata (Sonata 23)
because it made him “want to weep and pat people on the head, and we
mustn’t pat them on the head, we must hit them on the head, hit them
hard, and make them obey.” More of Beethoven’s intelligence is
needed, desperately, to create a signal that the current Lenins cannot
ignore, that will make them weep, and stop hitting heads. – Ibid, pg.
277

III. The left-handed, on the contrary, specialize in right-brain
functions, which are holistic, supra-verbal, “intuitive,” musical and
“mystical.” Leonardo, Beethoven and Nietzsche, for instance, were all
left-handed. Traditionally, left-handed people have been the subject
of both dread and awe – regarded as weird, shamanic, and probably in
special communication with “God” or “the Devil.” – Ibid, pg. 98 – 99.

IV. “To me, the Hammerklavier sounds like an unsuccessful
attempt at Tantric sex. And the Seventh and Eighth Symphonies sound
like monumentally successful attempts.” - Frank Dashwood in
Schrödinger’s Cat Trilogy, pg. 426.

V. Beethoven, we remember, was left-handed. Since the left
hand is neurologically linked to the polymorphous right brain, one
might say he was genetically inclined to right brain activities, that
is, to sensing coherent wholes, to plunging into neurosomatic bliss
almost “at will,” and to sensory-sensual raptness and rapture.
Everybody “knows” that the Sixth Symphony is “pantheistic,” but
whether Beethoven was an ideological pantheist or not, that way of
responding to nature is normal and natural right-brain Circuit V
functioning. That is, anybody on the Fifth Circuit will “talk like a
pantheist” whether or not he has developed a “philosophy” about
pantheism. The miracle of Beethoven is not that he felt the universe
that way – a few thousand fifth-circuit types throughout history have
also felt and sensed nature that way – but that he mastered the third-
circuit art of music with such skill that he could communicate such
experiences, which is precisely what the ordinary “mystic” cannot
do. - Prometheus Rising, pg. 183.

This progression, from primate emotion to post-hominid tranquility,
from “man” to “super man,” is the Next Step that mystics forever talk
of; you can hear it in most of Beethoven’s later, major
compositions. – Ibid, pg. 188.

VI. Beethoven, to cite him one more time, said, “Anybody who
understands my music will never be unhappy again.” That is because
his music is the song of the Sixth Circuit, of Gaia, the Life Spirit,
becoming conscious of Herself, of Her powers, of Her own capacities
for infinite progress. - Ibid, pg. 204.

VII. Mind and its contents are functionally identical: My wife
only exists, for me, in my mind. Not being a solipsist, I recognize
the converse: I only exist, for her, in her mind. Lest the reader
exclaim, like Byron of Wordsworth, “I wish he would explain his
explanation!”, let us try it this way: If I am so fortunate as to be
listening to the Hammerklavier sonata, the only correct answer, if you
ask me suddenly, “Who are you?” would be to hum the Hammerklavier,.
For, with music of that quality, one is hypnotized into rapt
attention: there is no division between “me” and “my experience.” -
Ibid, pg. 219.

VIII. Mystics stammer, gibber and rave incoherently in trying to
discuss this. Beethoven says it for them, without words, in the
fourth movement of the Ninth Symphony. The words of Schiller’s “Ode
to Joy,” which Beethoven set to this virtually superhuman music, are a
linear third-circuit map conveying only a skeleton key to the multi-
level meanings of the 8-circuit “language” of the melodic construction
itself, which spans all consciousness from primitive bio-survival to
meta-physiological cosmic fusion. – Ibid, pg. 269
on September 09, 2017

Thank you for sharing this. I miss Bob writing about Beethoven.

From a Psilocybin: Magic Mushroom Growers Guide book review by Robert Anton Wilson:
The only thing wrong with this book, aside from the price, is that they forgot to mention that you should always absolutely in every case whatever the circumstances play Beethoven's Ninth during the third hour of the mushroom experience. With earphones and your eyes closed. Then o dearly beloved may you find the Gold of the Philosophers, the Stone of the Wise, the Medicine of Metals, the Rosy Cross, True Wisdom and Perfect Happiness.