Bobby Campbell to do new illustrations for RAW novels 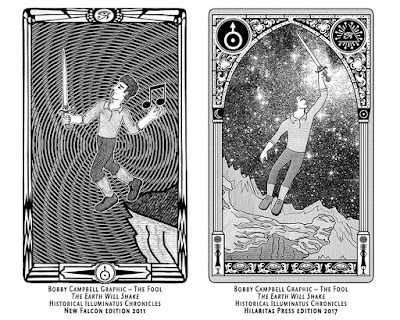 The next books being reprinted in revised editions by Hilartas Press are Coincidance: A Head Test and the three Historical Illuminatus books: The Earth Will Shake, The Widow's Son and Nature's God. (Full list of publication schedule available here.)


I've gotten the go-ahead from the Robert Anton Wilson Trust to share some news: Bobby Campbell is doing new illustrations for the Historical Illuminatus books. (I share news as soon as I can, but I support RAW's heirs and don't want to "scoop" official announcements without checking.)


"I’m currently drawing new chapter illustrations for the Historical Illuminatus Chronicles, which is a bit odd, since I had just done this same job back in 2010, but New Falcon has the book rights to my artwork, and so Hilaritas Press asked me to give it another go.

"It's a wonderfully challenging experience, being forced to top my previous best work, but I sure am having fun with it."

Richard Rasa, editor of Hilaritas Press, wants to point out that the new editions will have higher resolution reproductions of the illustrations.

"Really nice updating from his previous New Falcon edition versions! We are also very excited that the new books will have his graphics in 300dpi, unlike New Falcon’s much lower resolution!" he wrote in an email to me.
The illustration above, which Richard Rasa made for this blog post, illustrates the difference in resolution. Left, a New Falcon drawing, right a new one for the Hilaritas Press edition.

When's the next book coming from Hilaritas? Seems to be taking a really long time....

Inigo, you are right. We're always wanting the process to go fast, but there are a lot of elements to pull together, and we really want these new editions to look great. We think it's worth the extra effort, like multiple readers doing proofs, just to find any typos that would have made Bob cringe. Also, in a sense, we are constructing each new edition from scratch, as if Bob had handed us a typed version on paper. We don't have original digital files, thanks to New Falcon not wanting to give up anything to help the transition from them to us. I don't really blame them for not wanting to help, but they could have at least offered to sell us their digital copies. Alas, we have to scan Bob's books, page by page, run them through an OCR reader, edit the output, and then format it for eBook and then for Print editions. On one side, it's a pain. On the other side, we get to re-envision Bob's books in a way that we think he would have loved.

Thank you Rasa... I appreciate that attention to detail. The first four Hilaritas editions turned out great. Can't wait for the rest!