A libertarian novel about the war on drugs 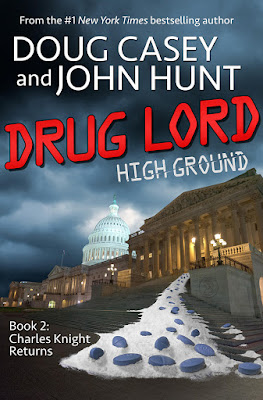 Michael Johnson recently posted a comment that included a quotation from Terrance McKenna when I posted an item about a California initiative to legalize psychedelic mushrooms.

I recently read a new novel about the war on drugs, Drug Lord by Doug Casey and John Hunt. It's part of a series of libertarian propaganda novels by the duo, second in a series. Apparently I like libertarian propaganda novels, because I enjoyed both of the first two books, and I intend to keep reading the series. The characterization in the books is not the authors' strong suit — everyone is either too good to be believed or one-dimensionally evil — but I like the constant flow of ideas, and the plotting isn't terrible.

Did you ever read the classic article from the Onion mocking the Libertarian Party, "LA Efficiency Chosen as Site of 2000 Libertarian Convention"? The piece was illustrated with a photo the purported to show the Ohio and Vermont delegations: 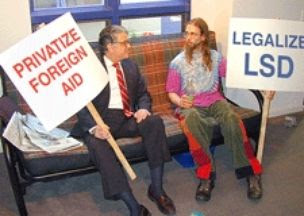 Drug Lord begins with a quote from Terence McKenna:

If the words "life, liberty and pursuit of happiness" don't include the right to experiment with your own consciousness, then the Declaration of Independence isn't worth the hemp it's written on.

Timothy Leary is mentioned, approvingly, in the novel.

The plot concerns a new antidepressant which is inhaled and works more quickly than conventional antidepressants. Users discover, however, that in high doses, the drug allows people to think more clearly about issues they have been repressing, and the drug becomes an underground drug nicknamed Naked Emperor. (One of the effects, naturally, is that many people "see the light" and become libertarians.) Naked Emperor is rather like the spiked tomato juice handed out by some of the characters  in Illuminatus!

There's a lot in the book about how the government (mostly represented by the FDA) and the pharmaceutical companies combine to prevent true competition in the marketplace, keeping drug prices high and reducing choice.
on September 13, 2017