Should RAW join Heinlein in the libertarian encyclopedia? 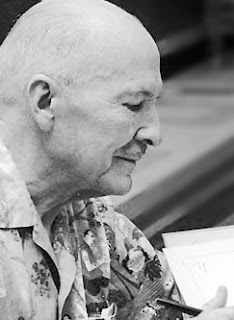 The Encyclopedia of Libertarianism, a project of the Cato Institute's Libertarianism.org, has been put online. Now everyone can read its entries on "John Stuart Mill," "Murray Rothbard," "Pornography," "Public Choice Economics" and on other individuals and issues.

The encyclopedia contains an entry on Robert Heinlein, one of RAW's favorite writers, and also a favorite of many other SF fans. The piece is written by Amy Sturgis, a libertarian scholar who has a Ph.D. in intellectual history.

There's no entry for Robert Anton Wilson, so I wrote to Aaron Ross Powell, director and editor at Libertarianism.org, asking if there would be new entries and if RAW could be considered. Powell made no commitments but told me that new entries were planned and explained that Jason Kuznicki is the editor of the encyclopedia and will be overseeing that. (I follow Kuznicki on Twitter).

I discovered the Illuminatus! trilogy in the 1970s in college, at about the same time that I learned that someone with my oddball set of beliefs, not fitting well on the usual left-right axis, was a "libertarian." Quite a few other people were making similar discoveries at the time.

Author Jeff Riggenbach, who has written a series of podcasts/articles on important figures in libertarianism, did one on Robert Anton Wilson. Here is a paragraph from that piece that captures Wilson's status as a libertarian figure:

... he became extremely well known. Nonetheless, he never let his fame go to his head. He continued to write for small, low-budget periodicals, including libertarian movement periodicals like Sam Konkin's New Libertarian, of which he was a contributing editor from sometime in the late 1970s through the 1980s.

He also showed up now and then at libertarian gatherings of various sizes and types. I still remember how startled I was one day in 1981, when I was chairing a panel on civil liberties at the national Libertarian Party convention in Denver. I had been chatting with my fellow panelists and letting them know how I'd be managing things, and I hadn't been paying much attention as the room filled up. So when, at last, I stood to make a few introductory remarks and looked out at the crowd that had gathered, I almost jumped out of my skin when I realized that the man sitting in the middle of the front row, virtually under my nose, was none other than Robert Anton Wilson, then in his late 40s and at the height of his fame.

Here is another bit of Heinlein news: SF critic Farah Mendlesohn has a crowdfund campaign going for a book on Heinlein. It's a good sign that Supergee recommends supporting the campaign.
on September 22, 2017

Speaking of SF, next year marks the centennial of Phil Farmer and Ted Sturgeon.