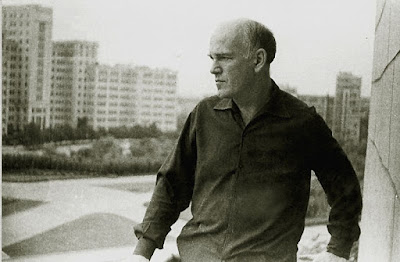 When you become a Beethoven fanatic, one of the questions that arises is who are the go-to musicians for performance.

I don't have any strong feelings yet about conductors, although I like George Szell's recordings with the Cleveland Orchestra.

I have been particularly interested in piano players. Until recently, I pledged allegiance to Alfred Brendel, and I still like him very much. His are the performances I prefer for the "Pathetique" and "Waldstein" sonatas. But lately I have become very interested in a Russian pianist, Sviatoslav Richter.

There are obviously many talented pianists who have tacked Beethoven, but there is something about Richter which is spellbinding. He also recorded a lot of Prokofiev, so he concentrated on two of my favorite composers.

There are many stories about Richter; who knows if they are true. Supposedly, one of his first recitals in Moscow was poorly attended — at first. The room was full at the end of the recital, because everyone in the audience ran out the door at intermission to find their friends and demand that they come.

One interesting fact about Richter is that he apparently only played and recorded pieces he was interested in. So while he recorded many Beethoven sonatas, there is no complete set of sonatas. He liked Haydn better than Mozart, and indeed, his Mozart does not particularly interest me.

He also didn't like recording as much as he liked playing live, so many of his albums are live recordings.

When you look for Richter albums (he is well represented in the two public library digital music apps, Freegal and Hoopla) almost any all-Beethoven recital is likely to be good. 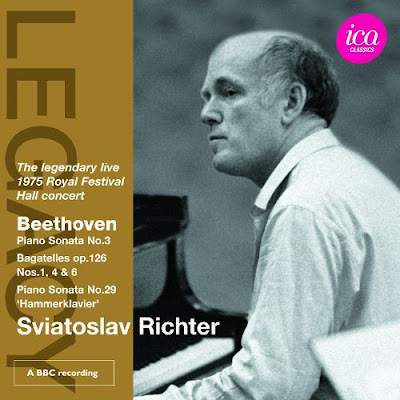 This album, recorded in England in 1975, seems particularly good to me. There's a fine performance of the "Hammerklavier" and a radiant rendering of the No. 3 piano sonata, plus three bagatelles.

I asked fellow Beethoven fanatic Eric Wagner for his suggestions for pianists. He replied, "Following Rafi Zabor, I love Solomon for 106, 109 and 111 and Schnabel for 109 and 111. I also love Rosen's op. 54 and 106. And Richter's Appassionata."

Rafi Zabor on Richter and Schubert, from an internet radio promo from two years ago: "Which leads us back to the piano sonatas of Franz Schubert—last week’s sonata in A must have been habit-forming—this time the composer’s last, #21 in B-flat, which he premiered a few weeks before his death via syphilis at the age of 31, alas. The performance is by Sviatoslav Richter, the piano titan whose centenary year this is, and he slows the opening movement far enough down to provide the link to Beethoven’s late sonatas; but where Beethoven’s mystical inwardness leads him into further thematic compression, even at his most expansive, Schubert’s depth-dive opens the music outward into the epic scope of an inward Odyssey. To follow Richter on this journey is an extraordinary privilege that invites deep listening. Another thing to remember about Richter is that he needed to keep a red plastic lobster close to him at all times, and since it was never visible in concert we must assume that he hid it in his piano bench. This is a studio recording, so he might have been happy to have it where he could see it as he played. Takes all kinds, I guess."