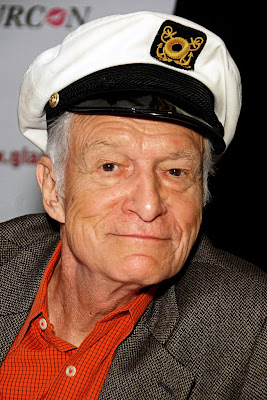 Playboy magazine founder Hugh Hefner, who inadvertently played a role in the creation of Illuminatus!, has died, age 91.

The New York Times obit is available. You can also read the Chicago Tribune article.

Robert Anton Wilson and Robert Shea were both editors at Playboy magazine, and many of you know the story about how that experience helped create Illuminatus! The magazine received many letters with wild conspiracy theories, and one day, sitting in a Chicago bar after work, Shea suggested writing a novel in which the conspiracy theories were true.

Wilson's Schroedinger's Cat trilogy has a character which obviously is based upon Hefner.

Several years ago, I contacted Playboy and asked to interview Hefner. I had asked my newspaper editor whether she would be interested in a story, and she said, "Sure." I would have used some of the interview for the paper, and some for a posting here. I never got a response, so that's one that got away.
on September 28, 2017