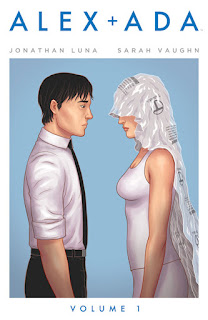 The Libertarian Futurist Society has given a Special Prometheus Award to Alex + Ada, a graphic novel by Jonathan Luna and Sarah Vaughn.

Set in a near future United States, Alex + Ada explores the social and political impact of the creation of artificial intelligences through the personal story of a young man, Alex, who receives an android companion as a gift from his wealthy grandmother. He faces a series of increasingly challenging moral choices about his relationship with the android, which he names Ada. As the story progresses, Alex, Ada, and other characters are caught up in a moral panic over androids that inspires repressive legislation and outbreaks of mob violence—and are tested by how they respond.

Luna and Vaughn’s treatment of artificial intelligence and virtual reality is sophisticated and technologically plausible. They tie the ethical question of which beings have rights to deeper philosophical issues of the nature of conscious experience and selfhood. And in the end, they hold up personal integrity in the face of a repressive society as an example worth following. Their story gives us a look at issues that a future world might have to address.

The award ceremony will take place at this year’s World Science Fiction Convention in Kansas City, at a time to be announced. The award includes a gold coin and plaque for the winners. Also to be presented are the annual Best Novel and Hall of Fame Awards, finalists for which were announced April 4 and January 18, respectively.

For a full list of past Prometheus Award winners in all categories, visit www.lfs.org. Membership in the Libertarian Futurist Society is open to any science fiction fan interested in how fiction can promote an appreciation of the value of liberty.
on May 11, 2016