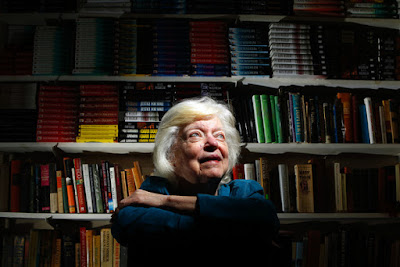 Science fiction giant Kate Wilhelm. She writes a lot of mysteries, too, but we SF fans insist she belongs to us.

Lists are always fun, and always a little annoying. Arthur Hlavaty pointed to to a list of "100  Must-Read Sci-Fi Fantasy Novels by Female Authors," compiled by Nikki Steele.

While the list helps make the case that women have contributed significantly to the SF and fantasy genre, it seems to me that the most convincing way to make the point is to list some of the novels that Nikki Steele leaves out: When Late the Sweet Birds Sang, Kate Wilhelm (Hugo Award); Downbelow Station, C.J. Cherryh (Hugo Award). I'm surprised those two authors aren't mentioned at all, and also surprised that Ursula LeGuin's The Left Hand of Darkness isn't chosen. (RAW was a big LeGuin fan, and Robert Shea campaigned for LeGuin's The Dispossessed to win the Prometheus Hall of Fame, which it did in 1993)

There are also more obscure books which I think are probably better than some of the books on Steele's list. I can't really fault Steele for leaving them out, but I'll mention them here: The Freedom Maze, Delia Sherman (Prometheus Award), Those Who Hunt the Night, Barbara Hambly (an underrated writer, probably). The Healer's War by Elizabeth Ann Scarborough is a great book that won the Nebula. Look to hear more about Johanna Sinisalo, whose The Core of the Sun I am currently enjoying.

Of course, I could list a lot of other pretty good SF and fantasy books by women, but those are all titles I strongly recommend.