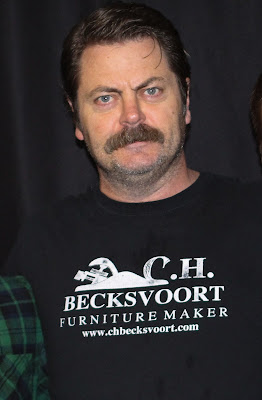 The New York Times has a wonderful recurring feature called "By the Book" in which the paper asks various famous people what books are currently on their night stand, what kind of books they prefer to read and what kinds of books they avoid, etc.

The latest interview subject is Nick Offerman, an actor, comedian, author and woodworker.  (He's best known for portraying "Ron Swanson" in the American TV comedy "Parks and Recreation.") The Times piece is a good read, but check out what he says when the Times inquires about books adapted into movies:

Which book would you most like to see on the big screen?

I generally find the book to be better than the film, so it’s a tricky proposition. There are a couple of Cormac McCarthy titles I would be thrilled to see, namely, “Blood Meridian” and “Suttree.” Both contain some very dark sides of humanity but also a healthy dose of gritty humor. But hold the phone! I know what I want more than anything: the Illuminatus! trilogy, by Robert Shea and Robert Anton Wilson. That would make for a delicious and freaky repast. If anybody gets that one greenlit, do please holler at me and I will deliver you the most commanding Hagbard Celine that I can muster.

The whole interview is worth a read. He mentions RAW elsewhere in the interview, and he particularly loves The Book of the Subgenius.

Nick Offerman's official site is mostly about woodworking, but reflects some of his other interests, too.

Proof that you can be both a Discordian and a Subgenius.