'The RAW Resurgence' — the director's cut 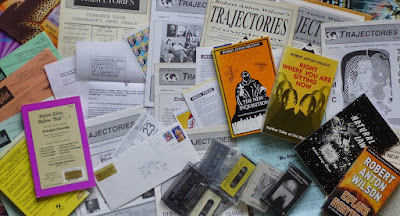 This is Brian Dean's illustration for his piece at Medium. Check out the return address on the letter!

In my March 23 blog posting, I pointed to Brian Dean's article at Disinformation on the resurgence of interest in Robert Anton Wilson.  I mentioned that many examples of that resurgence had gone unmentioned in the article, and the estimable Sue Howard, in the comments, explained that Disinformation had made him cut a much larger piece and also that Mr. Dean had focused on mainstream interest in RAW. [Clarification: Brian Dean says on Twitter: "Not quite true to say Disinfo "made" me cut it (I simply read their guidelines before submitting, to give it a better chance). Disinfo did a great job, btw, publishing it exactly as I submitted it, very quick to appear on their site."]

He's now published the original longer version of his piece, which offers a much more more complete picture of the resurgence and which name-checks a number of folks left out in the earlier version, such as the Cosmic Trigger play and Michael Johnson's Overweening Generalist blog. (He also mentions me, although as he had linked to my blog in his original piece, I personally was not unhappy.)

There are still folks left out, but it seems to be that's a testament to the breadth of the RAW revival movement. Any attempted survey probably is going to overlook someone who had contributed substantially to the movement. I should probably make my own attempt to survey the "scene," but I'm worried about hurting the feelings of anyone I inadvertently overlook.
on April 08, 2016

I can't quite make out the return address other than Robert Anton Wilson. What's the address?

I'm actually dying to see some of those Trajectories and other old newsletters. Especially the ones with pictures. Is the one a picture of RAW & others sitting around in his living room?

Brian: if you're reading this, it would be fantastic if you shared some more images!

In my photo there are also copies of The Realist (which had RAW columns). The Marilyn Monroe pop-art postcard & the Feb 23 "Far Side" cartoon were included by RAW in that letter, along with the "Committee for Surrealist Investigation of Claims of the Normal" letterhead. (The address label is his Santa Cruz address at the time).
-- Brian

good essay thank you so much i will find you again. hope to read smth like this next time
Marketing Research Assignment Help

Capstone Project Writing Service
Great material. Thanks you for posting this article!

I want to thank you for posting such an educational blog. And also will wait for your next post.
Financial Analysis Assignment Help