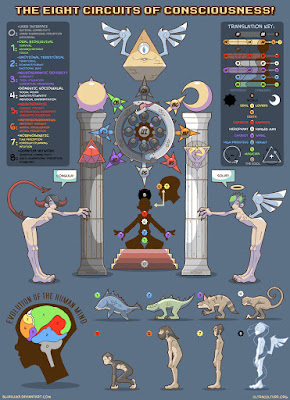 Via Bobby Campbell's "New Trajectories" Tumblr, here is an artistic rendition of the Eight Circuit model of consciousness, which is discussed in Prometheus Rising, newly re-released by Hilaritas Press. I don't know much about the origin of this, but the attributions at the bottom of the graphic mention artist Blueflake and also Ultraculture.
on April 05, 2016

Is this for sale anywhere Bobby?

This is pretty superficial for my taste.

Isn't this part of the new Chaos Magick guide currently running on Ultraculture?

I'm curious as to the deviation from RAW / TL's interpretation of circuits 5 through 8 as well. I think I preferred the original.

Then again, that's my reality tunnel. I always feel slightly awestruck imagining the possibilities of the higher circuits as described in Prometheus Rising or The Game of Life.