As others see us 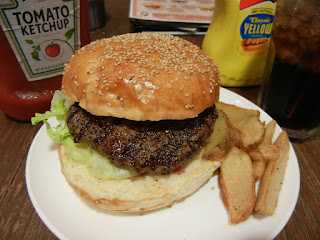 The hamburger is apparently the only food native to America. I guess American style barbecue doesn't  count.

David Langford's excellent Ansible newsletter has a regular feature, "As Others See Us," featuring snide (and often amusingly ignorant) comments about the science fiction community.

Seeing how others see the world differently, and essentially live in a different world, relates nicely to the Timothy Leary/Robert Anton Wilson concept of "reality tunnels."

Here are "10 Japanese Travel Tips for Visiting America," from Mental Floss magazine. Here is what sombunall Japanese supposedly think of our food:

American food is flat to the taste, indifferent in the subtle difference of taste. There is no such thing there as a little “secret ingredient.” Sugar, salt, pepper, oils, and routine spices are used for family meals. There is no such thing as purely U.S. cuisine, except the hamburger, which isn’t made at home so much. There is almost nothing special to eat based on the different seasons of the year. Basically, they like sweet, high fat, high calories things.

Wonder what they think of British food?

I remember visiting a burger emporium in Tokyo. It was packed with people under 30, and the decor looked like it was trying to match 1950s Unistat burger-joint aesthetic. There was American rock n' roll on the jukebox. However, no one looked "fat" - or I should say, "American Fat." I imagined it was their one day a week non-J food and most of their meals were made at home by mom. The kids there take English for years in school, but they don't get to practice it much, and if they can't speak it perfectly they'll look sort of panicked if you walk up to them and say, "Sumimasen. Eigo ga wakarimasu ka?" ("Excuse me: D you understand English?) I had a couple people turn and run away from me.

I'm a proud "tourist" (and I wish I could afford to do it as much as I used to), and think as a sort of ambassador, my main goal to NOT be the stereotyped Murrkin, much less the "Ugly American." Crash on 50 words and phrases before you go and really know them by the time you touch down: please, excuse me, thank you very much, where is the __?, how much is the__?, I'm sorry, my (language) isn't very good, more slowly please?, etc. If you learn this last one too well, you run the risk of sounding "modest" and unbelievable, and often they'll smile and go on in their language, and you have to say it once again, so they know you really don't know what they're saying.

Tony Smyth lives there, so he ought to chime in here.

"American Fat" is largely due to the over-consumption of sugar, corn syrup, potatoes and bleached flour.

As far as the quality of American food goes, these people obviously have not been to New Orleans or several other American cities where the food culture is rich, varied and delicious.

Lonavala is quite the trendy weekend getaway from Mumbai and Pune. And to add a touch of luxury and adventure to your weekend escape, you can ditch a regular hotel and stay at The Machan in Lonavala. This eco-resort has tree houses mounted 30-40 feet above the forest. Not only does it offer tranquility but also an extremely dreamlike view. Tree House Resort