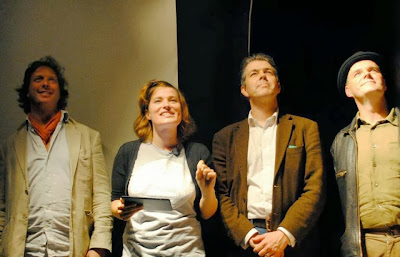 Daisy Campbell, second from left, and some of the folks who were involved with her Cosmic Trigger play.

The folks who put on the Cosmic Trigger play are asking people to take an online survey. If you helped the play by attending it in Great Britain last year, or if you contributed to the crowd funding, or if you are new to the play but think you might want to support it, please take the survey. New performances are planned next year in both London and Santa Cruz, Calif. The survey has been up for a while and will likely go away soon, so if you want to help, take it now, or at least soon.
on April 03, 2016