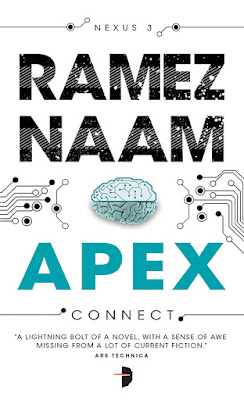 [This is the group I blogged about Saturday. This is an official press release that came out this week. Apex just won the Philip K. Dick Award.  -- The Management. ]

The Libertarian Futurist Society has announced finalists for the best Novel category of the 36th annual Prometheus Awards.

The 2016 awards will be presented during the 74th annual World Science Fiction Convention Aug. 17-21, 2016 in Kansas City, Missouri.

The five Best Novel finalists (in alphabetical order by author) for this year's Prometheus Award for best novel of 2015:

Golden Son, by Pierce Brown (Del Rey) – Slavery versus freedom is a central theme of the intriguing second novel in "The Red Rising Trilogy," set on a future Mars inhabited by the idle-rich Golds and slave-miner Reds. Questions about trade-offs between chaos and control and whether the ends justify the means are explored as the libertarian protagonist strives to help the Reds revolt and create an equal-rights society only to learn that some slaves actually don’t want to be free. (This is Brown’s first recognition as a Prometheus nominee and Best Novel finalist.)

Apex, by Ramez Naam (Angry Robot) –Set in a future where a substance called Nexus allows humans to connect through their minds, the gripping finale of the “Nexus Arc” trilogy dramatizes a conflict between major world governments, controlled by deceitful and corrupt men who censor truth and spread disinformation, and rebels who seek to bring down these governments by improving communication and enlisting the support of free individuals (both human and human-derived AI). A central question explored is whether it’s better for governments to contain technology, in the name of protecting the people, or to allow technological advancements, even with big risks. (Naam won the 2014 Prometheus Award for Best Novel for Nexus, part of a trilogy that continued with Crux and ends with Apex.)

Seveneves, by Neal Stephenson (William Morrow) – This epic hard-science fiction novel, about a cataclysmic event that threatens human civilization and the planet Earth, avoids ideology but still dramatizes how a lust for power almost wipes out humanity, while also showing how voluntary cooperation, individual initiative and the courage to face reality and tackle overwhelming problems through reason and private enterprise helps tip the balance towards survival, as a small group – including some of Earth’s bravest and richest entrepreneurs - risk their lives to save mankind. (Stephenson won the Prometheus for Best Novel in 2005 for The System of the World.)

The Just City, by Jo Walton (TOR Books) – Recognizing that utopian works are one of the sources for science fiction as a literary form, Jo Walton returns to one of the founding utopian works, Plato’s Republic, and enters into a critical dialogue with it. The process she envisions is science fictional — admirers of Plato from across many centuries are gathered together to raise children as citizens of Plato’s ideal city — but the underlying premise is fantasy: the project is initiated by Athena, and taken up by Apollo. Walton’s political themes - including issues of “equal significance” and the difference between genuine and manipulated political consent – are dramatized through a series of striking incidents and well-drawn characters. (Walton won the Prometheus for Best Novel in 2008 for Ha’penny)

A Borrowed Man, by Gene Wolfe (TOR Books) –This intriguing sci-fi murder mystery – which also works as an old-fashioned detective novel and a writer’s meditation on mortality and the desire to produce a body of work that will be remembered - offers a deeply sympathetic portrait of a human clone/slave “book” struggling for his basic existence and humanity in a diminished future Earth where such “books” are treated like pieces of property that can be checked out and ultimately burned. (This is the first Prometheus finalist by Gene Wolfe, one of the most admired sf writers in the field.)

The Prometheus Award, sponsored by the Libertarian Futurist Society (LFS), was established in 1979, making it one of the most enduring awards after the Nebula and Hugo awards, and one of the oldest fan-based awards currently in sf.

Presented annually since 1982 at the World Science Fiction Convention, the Prometheus Awards include a gold coin and plaque for the winners.

For a full list of past Prometheus Award winners in all categories, visit www.lfs.org.
Membership in the Libertarian Futurist Society is open to any science fiction fan interested in how fiction can promote an appreciation of the value of liberty.