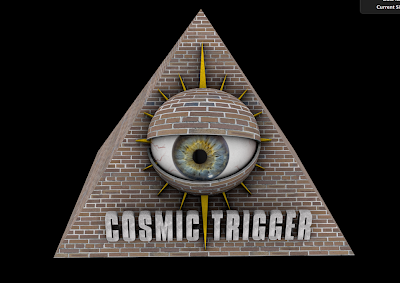 From Daisy Eris Campbell's email list: Early tickets for the 2017 revival of the Cosmic Trigger play in London will go on sale Saturday.

Here's the official word, says Ken Show in an email:

As you may know we (you+us) plan to revive Cosmic Trigger Play in 2017.

We're launching a super-earlybird ticket sale for final night of the London run of Cosmic Trigger Play.  On this special day only will be mind bending pre-show extras and entry to an after show shindig that you are not going to want to miss.

These tickets are for a show just over a year away. You may wonder why we are selling them so far in advance.

We are applying for FUNding! By pre-selling 123 tickets now and fast, we'll prove to the Cosmic Keepers of the Purse that there is an audience for Robert Anton Wilson-related theatre. Praise Bob!

THE LINK TO BUY YOUR TICKETS WILL GO LIVE AT 5.23pm THIS COMING SATURDAY 23rd APRIL 2016 WHEN WE WILL SHARE IT HERE, ON FACEBOOK AND ON TWITTER.

Wake thyselves beautiful wonderful golden children of the cosmos. The time is near. The adventure is about to begin again, (Fin-in-egan).

More here, at the official site (which I assume will have the link).