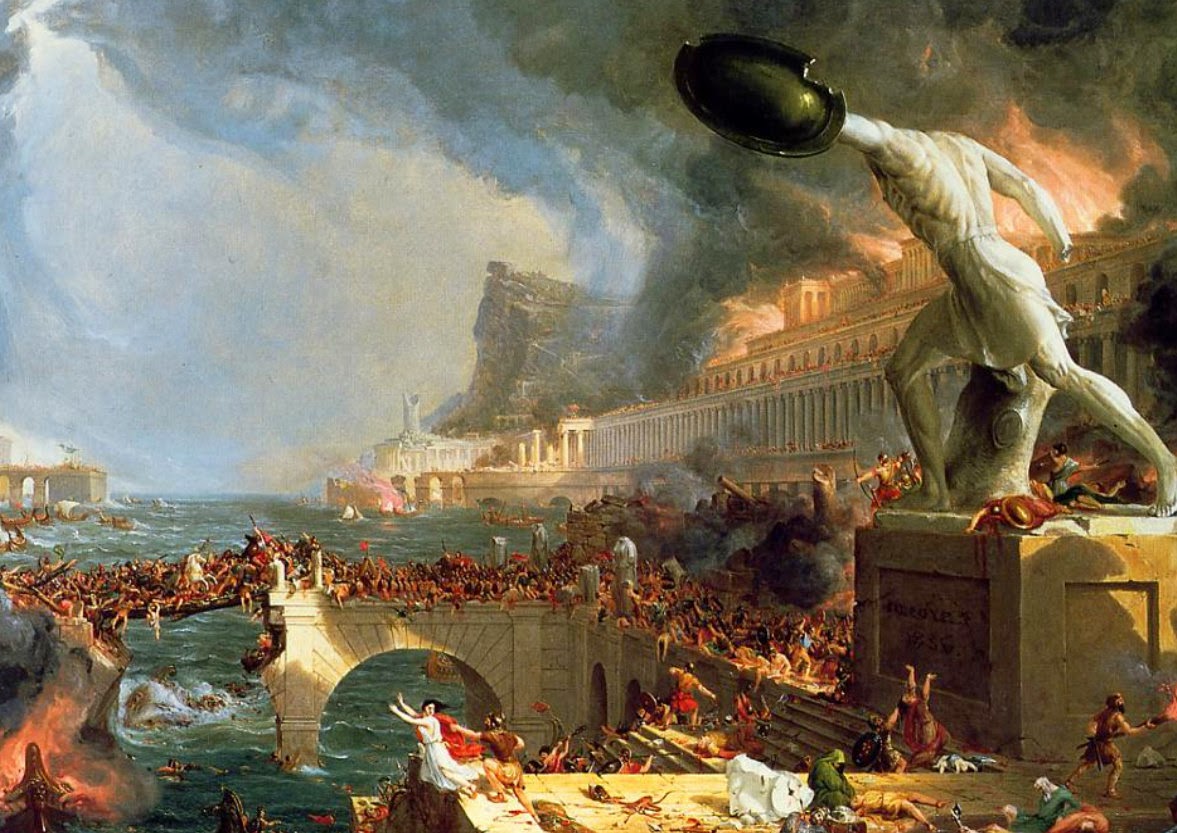 Thomas Cole's painting on the fall of Rome, an example of the cycle of conquest described at the bottom of page 461.

Here we get a long passage written (or mostly written by Robert Shea); as I wrote in a previous entry, Wilson stated in an interview that Robert Shea wrote the Atlantis portions of Illuminatus!

The allegorical story of Atlantis and its fall, brought about by power-wielding barbarians, provides antecedents to the statists who are the Illuminatus! bad guys, doctrinaire libertarians and Discordians, the three groups represented by Gruad, Ingel Rild and Lilith Velkor. (Many of the names are suggestive or anagrams; Gruad can be changed to "guard," "Lilith" is suggestive of Eris.)

All three groups have legitimate points to make; what makes Gruad's group so terrible is the use and abuse of power: "The Party of Science demands that Atlantis publish the natural laws Gruad has discovered and make them binding on all with systems of reward and punishment to enforce them," page 449. On page 452, Gruad creates soldiers. "They will have no hesitation about destroying men and will act only on Gruad's command." Gruad loves walls and the fortifications that are the symbol and expression of the type of top-down civilization he believes in: "I love any kind of all. Anything that separates. Walls protect good people. Walls lock away the evil. There must always be walls and the love of walls ..." page 459. Only a wealthy, powerful state can build such walls. Hence the Great Wall of China built to keep barbarians out, the walls around Rome and Constantinople that slowed the "fall of the Roman Empire" from invading barbarians, etc. Rome relied on its armies for centuries and did not have walls until the Emperor Aurelian built them, prompted by German invasions of Italy.

On page 452, Gruad creates soldiers. "They will have no hesitation about destroying men and will act only on Gruad's command."

Not too far down the line Hagbard orders Milo to "kill a white man", which he does.