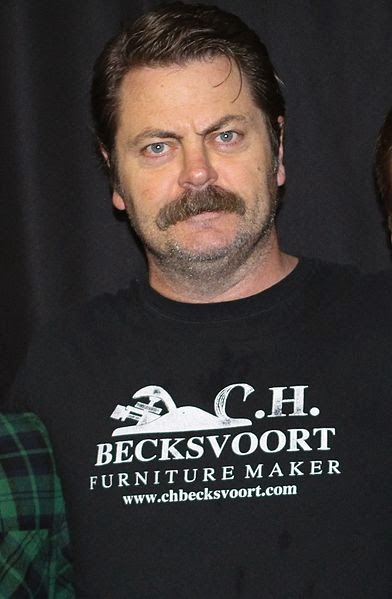 Thanks to my ignorance of pop culture, I'm afraid I didn't know who Nick Offerman is until Thursday; he's a successful American actor with a long list of credits and is best known for his role on Parks and Recreation, a popular (and well reviewed) American situation comedy starring Amy Poehler. And he also writes and has about 648,000 followers on Twitter, about 647,500 more than I do.

Oh, and one other bit of trivia. Last year, he listed his 12 favorite books for Barnes and Noble, and guess who pops up in the list?

Yeah! This one blew my mind! I'm a big Parks and Rec fan, and particularly enjoy Nick Offerman's character Ron Swanson, who you may be delighted to know is a lovably extreme libertarian.

Ron Swanson on Government and Being a Man
https://www.youtube.com/watch?v=VK4kQF6Zu6w

It was Bobby who spotted this -- I should have mentioned that.