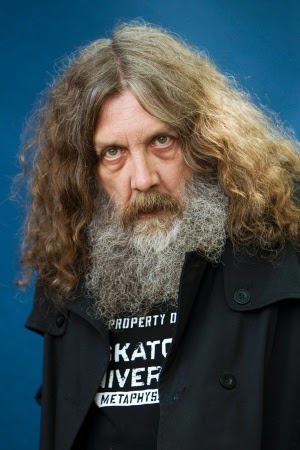 Alan Moore, referred to by John Higgs and others as the "greatest living Englishman"

The Guardian on Tuesday ran birthday wishes to whistleblower Chelsea Manning from a variety of artists, intellectuals and activists, including Edward Snowden, Michael Stipe, Molly Crabapple, Terry Gilliam and others. But I'm guessing that many of your who bother to read this blog will be particularly interested in Alan Moore's contribution, which you should go read.

A bit further along, Mr. Moore writes, "You are, reluctantly I’m sure, a heroine to millions and, it can be safely said, to further millions yet unborn. I’m also relatively certain that there are those moments when that knowledge offers only the most threadbare wrap of consolation and I wish, along I’m sure with many of your other correspondents, that I could provide something more tangible. Alas, in a communication such as this it’s only words and ideas that can be relied upon to not set off the X-ray scanners. Fortunately, occult charlatans are as a group more comfortable with the intangible, so if it’s not presumptuous may I at least offer you this, the idea of a cake that has the idea of a file concealed within it: human beings can never experience reality directly, but instead only experience their own perceptions of reality in the vibrations of their tympana, in signals from their nerve ends and in the photon bombardment of their retinas. To any individual, the outer universe – from its most minute quanta to its furthest, oldest galaxies – is a phenomenon occurring only in their mind. This is not solipsism, but simply a recognition that each man and woman is positioned at the centre of a cosmos that is theirs alone, with the individual as its pivot and its governing intelligence. Our inner world is, in this sense, the only world that we can ever know or live in, but our inner world is endless and immeasurable, and is also the mysterious fountain from which most of the apparent outer world around us has emerged. The territory inside is the most potent and astounding human territory of all, and is accessible by anyone, regardless of their tangible, material circumstances. As the great American philosopher and entertainer Robert Anton Wilson once had his fictional character John Dillinger remark: 'The only way to escape from a locked cell is to walk out through the wall, into the fire.' You have proven in so many ways already that the fire inside you is a powerful one, and I’m convinced it will sustain you."

Special days comes once in a year, Send Best Birthday wishes to loved one on the Birthday

wishing on the Birthday will give lot of smile on faces, wish the loved with Best Happy birthday messages

Thank you for some other informative site.

Birthday are very special in human life share Birthday Wishes to others...

Birthday is a very special day for everyone. May god help you to make all your dreams come true.. Wish you a very happy Birthday Wishes.

A Person can merely enjoy two occasions relating to him/her personally.
One, is Birthday - a day in a year.
Another, is Marriage Day - A Day in a Lifetime.
Both are most precious ones, which stay memorable for a long time.

I wish you a very very Happy Birthday to you and Birthday Wishes fill the life with joy and blessings.

Great post! I am actually getting ready to go across, this post is very informative.Get Happy Birthday
Birthday Quotes

Special Celebrations always give Beautiful memories ,Send Happy Birthday wishes who are very special to you and remember you for ever

Hello, the template is really awesome. Great article, helped me a lot! Thanks a lot for sharing this article with us.