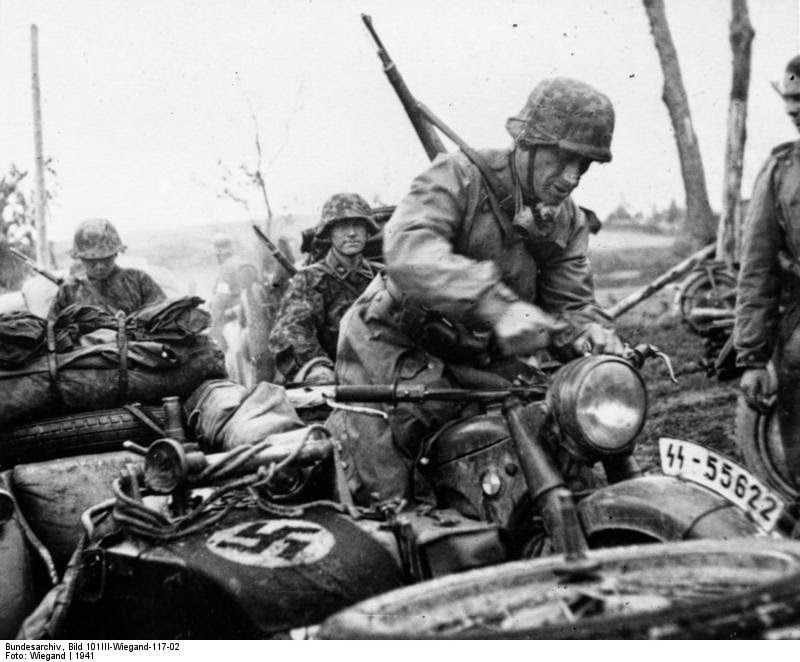 Motorcycle infantry of the 3rd SS Panzer Division on their way to Leningrad.

In this section, the Illuminati plot to massacre the crowd at a rock music festival is revealed. And although the plot of the novel obviously is fantastic, it echoes real events in World War II.

While Lake Totenkopf apparently is fictional, there really were fanatical SS divisions in World War that were part of the German war machine — and one of them, the 3rd SS Panzer Division was named the Totenkopf.  ("Totenkopf" means "death's head.") The Wikipedia article describes the Nazi fanatics who made up the division and the war crimes they committed. They surrendered to American soldiers at war's end, but the Americans handed them over to the Russians, and many of the survivors died in Russian concentration camps. (Wikipedia explains helpfully that the panzer division, the apparent model for the "entire SS division" on page 472 of Illuminatus!, should not be confused with a separate SS organization which ran the Nazi death camps.)

And here is a British newspaper article about the remains of many people being found at the bottom of a Swiss lake.

There are other grim echoes of real life in Illuminatus! Page 473 refers to the "old fear" of the Russians that "Germany will once again, with the help of the capitalist powers, rise up and attack Russia and slaughter Russians for the third time this century ... " The first time, of course, was World War I, and the defeat was so bad it resulted in the overthrow of the Czar and the eventual capture of power by Lenin, who appears as an unnamed character in Masks of the Illuminati.  And the second, as you know, was World War II, when the Russians suffered unimaginable slaughter. (Last summer was the 70th anniversary of the D-Day invasion of France by the western allies. An important event, to be sure, and I interviewed a war veteran, as did many journalists. But it was really the Russians who did the main job of defeating the Nazis, although I'd guess that only a minority of folks outside of Russia realize that.) During the days of the Cold War, one of the main armies of NATO was a big West German army assembled through conscription.

A couple of other notes:

"to get stoned and watch late movies on television," page 463. Watching late movies on American TV gave Joe Malik a built-in mash up, with lots of commercials, a replication of the cut-up technique invented by Brion Gysin and popularized by William Burroughs and used in Illuminatus! The early Surrealists in France used to run in and out of movie theaters to obtain a similar effect, and the late Beatle John Lennon enjoyed switching from channel to channel as he watched TV.

"Otto Waterhouse must kill a white man." page 467. The assassination is ordered by Hagbard Celine, who thus winds up replicating the actions of his enemies (as Chas pointed out last time, in the comments.) Whether conscious or not, this is another echo of "the good war" — the Germans bombed cities but saw German cities largely destroyed in a more ruthless and deadly fashion, including Hamburg and  Dresden in World War II.  (No doubt many of you have read Kurt Vonnegut's Slaughterhouse Five, which includes the Dresden massacre.) The Japanese committed atrocities, particularly in China; many Japanese cities were pretty much destroyed in firebomb raids, not to mention Hiroshima and Nagasaki. Of course, it's also appropriate that Flanagan dies as a result of his own assassination raid.

"It was the service entrance," page 467. The Black Mass that takes place previously in the work was in an apartment on the 17th floor of 2323 Lake Shore Drive.

1. In his memorial essay on Bob Shea, RAW mentioned that they'd come up with the Salem/Wolf Man bit while smoking dope together and he forgot it until Shea put in the book.