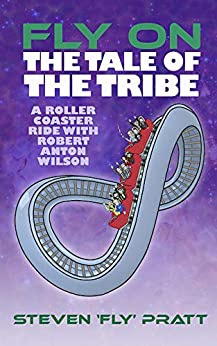 A lot of Maybe Day material was released Saturday and I am still trying to get caught up with it all. I did watch the first video featured at Bobby Campbell's Maybe Day website, all two hours and seven minutes of it, focusing (at least for much of the first part) on Robert Anton Wilson's never-completed Tale of the Tribe book. The video features Mike Gathers, Bobby Campbell, Toby Philpott, Prop Anon, Brenton Clutterbuck, Dr. Richard Waterloo, Oz Fritz,  Steve Pratt, Eva David (in the second half or so) and Eric Wagner (cameo appearance.) A lot of interesting points, and a couple of people recommended Fly's Fly On The Tale Of The Tribe: A Rollercoaster Ride With Robert Anton Wilson, so I've put the book cover on this posting.

I really liked Bobby Campbell's new comic, A Quantum of Discord, which he released Saturday. And I also was impressed by the new RAW Experimental site set up by Brian (of RAW Semantics.) Apologies to everyone who put out material I haven't gotten to yet -- as Bobby wrote on Twitter, "There's a ton of wild stuff all over the place."

Brian's RAW Experimental project is really neat. I never met RAW, and all I know of him is through the Internet. Seeing him in some more detail helps make him look more than a meme, but an actual man who lived. I tend to lose that human perspective experiencing other people through the digital medium.

Does Toby Philpott has some online presence around these parts? I really liked his parts during the Maybelogue, and he seems like a good natured and interesting person.

I also thought A Quantum Of Discord was super fun and smart. I wish all the best to Bobby Campbell and his future projects.