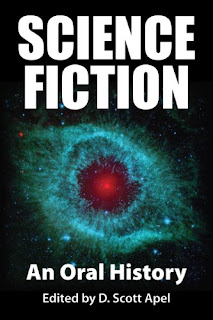 Robert Anton Wilson gave many interviews during his life, and a great many of them are available at the RAWilsonfans.org website.  Some of the best also are reprinted in RAW's books.

I'd identify my favorite interview, one that blows me away each time I re-read it, as a Jan. 12, 1977, interview with Wilson, with questions posed by D. Scott Apel and Kevin Briggs. It's the source of the quote in my headline for this post.

There's discussion of the importance of science fiction conventions, the concept of Hilaritas (from which Hilaritas Press gets its name), Wilson reflecting on "What brought me here tonight?" and many other topics.

But what really stands out for me is that Apel and Briggs apparently gave the Illuminatus! trilogy a very close read, and they ask many penetrating questions about it, such as which parts were Wilson and which were Robert Shea's, how the publication of the book as science fiction affected its reception, the parts that were cut out, the writers who influenced the work, how it attempts to break down class distinctions in literature, how it uses the multi-model approach, the influence of Kabbala, how the work depicts the "basic conflict between the two schools of mystics," Joyce's discovery that we are all living inside a novel, and more.

There are some quite startling statements, such as, "I think Lovecraft is a hell of a lot more important an artist than Saul Bellow." And there's discussion about how science fiction is "the natural mythology of our time."

There are two ways to access the interview. The cheapest is to buy the Kindle version of Science Fiction: An Oral History, edited by Apel. It's 99 cents (you can get a paper copy for $9.99.) (If you don't own a Kindle,  you can read it on a smartphone using a Kindle app). Along with the RAW interview, there are interesting interviews of many of my other favorite writers, such as Roger Zelazny and Theodore Sturgeon, and a particularly well-done interview of Philip K. Dick.

Or you can get Apel's (and Wilson's) Beyond Chaos and Beyond, which is a little more expensive but which reprints many RAW articles and includes Apel's biographical essay about RAW.

I'd say it is more or less an objective fact that Lovecraft was more influential than Saul Bellow. Very few people outside of contemporary lit classrooms or the set that takes the NYT Review of Books seriously read Bellow anymore, I would imagine while Lovecraft's influence is everywhere. As far back as undergrad, I've maintained that speculative/fantastic fiction is much more timeless than realistic, "literary" works.

Got into a very nasty exchange versus the worth of reading Clark Ashton Smith vs. Henry James once.