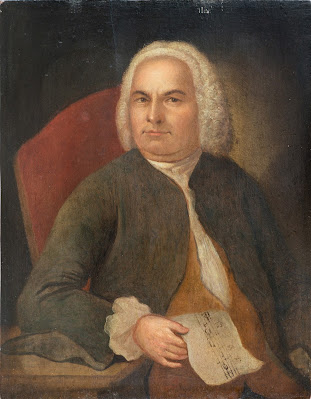 A portrait of Bach
I have been listening to a lot of Bach lately. There is so much to explore!

Bach was an important composer to Robert Anton Wilson. I generally associate RAW with his love of Beethoven, but it's clear Bach was important to him, too. In "Credo," in the book Right Where You Are Sitting Now, Wilson writes, "I believe in Bach, the creator of heaven and earth ... " In Prometheus Rising, Wilson remarks that Bach "may have written the sexiest music in history" and makes other references to Bach.

Another of my favorite writers, Richard Powers, also writes about Bach. There's a lot about the "Goldberg Variations" in Powers' novel The Gold Bug Variations, but references to Bach also pop up in many of Powers' other books.

If you do decide to dive into Bach, where to begin? Tyler Cowen offers this short list: "Bach's B Minor Mass and St. Matthew's Passion, The Art of the Fugue, WellTempered Klavier, some of the organ music, the Brandenburgs, the Partitas, the Goldberg Variations, and the solo violin works."

That's a pretty good list, but I tend to concentrate on the cantatas, which have many of Bach's greatest hits. I listen to the BWV 140 cantata, Wachet auf, over and over again. I first encountered it in a college music appreciation class and have loved it ever since. I also like the Hunting Cantata, which includes "Sheep May Safely Graze." And I've been listening in December to much of Bach's Christmas music, including his Christmas cantatas. I'll likely explore other cantatas during the new year. There is so much of them.  (I'll mention again that the Bach Guild's digital recordings on Amazon are a really cheap way to build a classical music collection. The "Little Baroque Christmas Box," which I bought about a week ago, has four Bach Christmas cantatas, plus albums by Apollo's Fire and LionHeart. 99 cents.)

One feature of Bach's music that interests me is that it seems to be amenable to endless rearrangements for different instruments. I became familiar with many of Bach's best-known tunes from the Switched on Bach album. A pop group, Apollo 100, had a hit song on Top 40 radio in 1972 with "Joy," an arrangement of a song from Cantata Number 147. There are probably all sorts of other examples I'm not thinking of.

I don't know what Bach RAW liked to listen to. Maybe Eric or Rasa might know?

Email ThisBlogThis!Share to TwitterShare to FacebookShare to Pinterest
Labels: Bach

I am pretty sure I've seen Robert Anton Wilson mentioning the book Gödel, Escher & Bach somewhere. Maybe The New Inquisition, but I could be mistaken.

Bob loved GEB, and he talks about it many places including Prometheus Rising.

I wondered about RAW's tastes in music, which I think were wider than he let on in his books. It's true he did seem to mostly mention Beethoven, Bach and Vivaldi, but here's a quote from The New Inquisition:

"These reality-tunnels, assumed to be “realities” and experienced as “realities,” are not only as varied and imaginative as the paintings of Rembrandt and Van Gogh and Picasso, etc.; they are as marvelously creative as the musics of Vivaldi and Beethoven and Wagner and Harry James and Rock and Indian raga and Polynesian chants..."

We used to send RAW our Starseed music CDs, and a several times over the years Marlis and I would bring tamboura and Sitar over to the Wilson's, and later to Bob's, for mini-concerts.
(Check out our new website: http://starseedmusic.net)

Bob blew me away one time when I sent him our latest CD and he sent me an email back with this quote:

“This music – intricate yet melodic as Bach, austere as a Zen shrine, sensory as a massage – seems like aural eroticism to me.”