Martin Wagner tracks down a 1972 article on John Dillinger that offers background on the notorious criminal (and Illuminatus! character.) The opening sentence is hard to beat:

John Herbert Dillinger—you remember, the big 1930’s hold-up man who looked like Humphrey Bogart—lit a flame in the hearts of Ma and Pa America which no other major criminal has equalled, unless you include a few recent Presidents.

Much of the article covers ground that many of you read in Illuminatus! and also explains the John Dillinger Died For You Society.

The Wikepedia article on John Dillinger is interesting and shows that much of what RAW wrote is fairly accurate but that RAW's account also includes some mistakes. Here's RAW on the incident in Little Bohemia:

Surrounded by the Feds at Little Bohemia Lodge in Lake Geneva, Wisconsin, he escaped out a back window, while Hoover’s Heroes shot lots of holes in four vacationing businessmen who walked out the front door at the wrong moment.

Special Agent in Charge Purvis and several BOI agents approached the lodge when three men exited the building and began to drive off. Agents yelled for the car to stop, but the men had been drinking and did not hear the agents. Agents opened up fire on the car and the driver was killed.

Dillinger and some of the gang were upstairs in the lodge and began shooting out the windows. While the BOI agents ducked for cover, Dillinger and his men got out the back of the lodge toward the lake and were able to get out of the area very quietly.

But the article also offers confirmation for some of the more wild bits in the RAW article, including the controversy over whether Dillinger was the person actually killed by the FBI. (Plans to exhume Dillinger's remains in 2019 apparently fell through.) 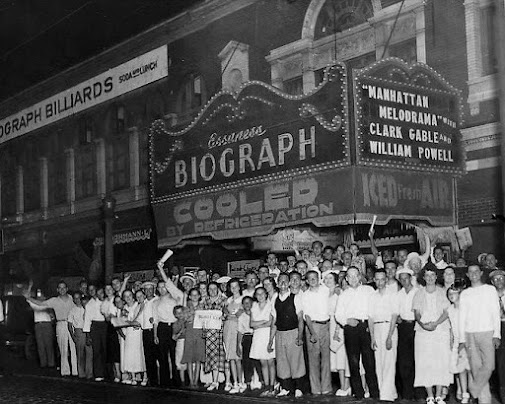 Crowd at the Biography Theater shortly after Dillinger was shot to death by the FBI.