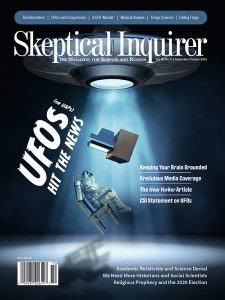 I had forgotten the vicissitudes of getting magazines by snail mail. The cover of the new issue of The National Review arrives with nothing inside.  Either intentionally or accidentally most of the magazine did not arrive in my mailbox. Oh well. I must admit it pleased me to have such an easy excuse not to read the new issue. The Skeptical Inquirer still hasn’t arrived. I suspect it will take me at least a year to finish these four exercises.

I enjoyed reading Fate magazine. I read a nice article on pets on the Titanic, and it pleased me that one author still believes in the Priory of Sion. I wonder what Bob Wilson would have made of the debunking of that conspiracy.

About fifteen years ago doing the exercises in this chapter I bought a copy of Scientific American. It had an article on how researchers had burn victims play a skiing video game, and playing the game lessened the patients perceived pain as they vividly imagined the intense cold of the world of the game. This pleased me because some of my fellow teachers at the time perceived videos as worthless.

I have had a number of discussions with intelligent Muslims recently. I forwarded Bob Wilson’s interview with David Bohm to some Muslim friends, and they really liked it. This year I heard more references to Ramadan than ever before. Even Weight Watchers had an article on how to follow the WW plan during Ramadan this year. I don’t remember Weight Watchers ever mentioning Ramadan before (and I first joined Weight Watchers back in 1978).

I have little desire to “find a victim and explain the universe to him or her, until they are able to escape you” at this time. I may not repeat this exercise this time around.

I ordered a year subscription for National Review and Skeptical Inquirer print editions yesterday. Reading opinions that don't agree with our own seems a way to observe how contrary belief systems create different tunnel realities. Perhaps this helps us see how our belief systems create our favorite realities? Maybe I state the obvious?

The learned ability to put ourselves in the position of others appears to positively affect communication with them. The maxim: communication only appears possible among equals would suggest some understanding of the beliefs of those we wish to communicate to. Another exercise in Laura Huxley's book mentioned earlier has the title Shoes or Other People's Shoes, something like that. Not only does communication appear more effective by applying this consideration, we find compassion for others increases too.

A movie I highly recommend, Real Men shows the transformative aspect of expanding beliefs. Every time I view this low budget, B level, secret agent satire my suspicions increase that the writer(s) referenced RAW's books. Not only because the newbie agent character, played by John Ritter, is named Bob Wilson. We get a Prometheus Rising reference when Bob Wilson needs to manifest a quarter and unexpectedly succeeds; friendly hi-tech aliens - at one point Wilson says: "I think the UFOs are helping" as he mows down the bad guys with a make-believe gun; even a reference to Stranger in a Strange Land. It's very funny, very ridiculous, but sweet. The other lead character, Wilson's more experienced guide, acted by Jim Belushi, plays a trickster type who gets the tables turned on him by another trickster. The overall mission in the plot recalls an extremely simplified take on Buckminster Fuller's "weaponry vs livingry" dialectic, also his book Utopia or Oblivion. Wilson eventually gets rewarded with a special pen from the aliens - all the metaphors in the film appear that obvious when related to RAW. It's available to watch for free on You Tube.

Thank you for the film recommendation, Oz.

The opposition between rationalism and Fate magazine reminds me of the X Files. Even though that is not what the show is most remembered for, a very interesting idea was that, beside being the rational, scientific and skeptic mind of the duo, Dana Scully also had religious faith. On the other hand, despite having no problem believing in UFOs, aliens and unexplained phenomena, as well as being skeptical of every “official version” of things, Mulder simply couldn’t resolve himself to accept the possibility of there being a god out there.

My rant from last week about the state of French press made me realize that perhaps nowadays, in many places and especially where democracy seems to be facing a push back, the dichotomy between reality tunnels doesn’t play so much between different newspapers but rather between traditional spheres of reporting information (ie news on paper or on TV from established names) and “unofficial” independent news reporting medias, almost always on the web (at best a website, often FB groups, tweeter accounts or Telegram feeds). And here come the so-called “fake news” along with a world where it often seems like you can “trust no one” regarding information. In a way, it almost feels like we’re living inside Illuminatus!

I subscribed to the online version of the Skeptical Inquirer. I’d love to get Fate as well but they use paypal which somehow only ever gave me trouble in the past (still does, I just tried). These two should be more fun to read than the news. After all, I do not believe that taking the exercizes seriously mean to turn them into a chore.

I got my hands on Laura Huxley’s Rainbow Walk, the b-side from Your Favorite Flower. YT wouldn’t allow me to upload a video longer than 15 minutes without registering my account to Google through my phone number or something, which I am not willing to do. So, for anyone interested, here is a .rar of both sides of the record: https://www.sendspace.com/file/b0gjf5

Lastly, it might be of interest to some to know that recently, the Illuminatus! audiobook has been uploaded to YT: https://www.youtube.com/playlist?list=PL3hyIL_uguQDfAPiJAPQS87pvm8BJZ5tp