The Prometheus Award, usually given out at a science fiction convention, was awarded in an online ceremony this year in a cooperative venture with Reason magazine, and the above video of the event, two hours long, has two parts. The first 15 minutes features the award being given to Barry Longyear for  his novel, The War Whisperer: Book 5: The Hook, and the Prometheus Hall of Fame Award being given to F. Paul Wilson for his short story, "Lipidleggin." That's followed by a panel discussion, one hour and 45 minutes, featuring Longyear, Libertarian Futurist Society president William Stoddard, Reason book editor (and RAW expert) Jesse Walker, and Reason magazine's editor, Katherine Mangu-Ward.

Illuminatus! is brought up twice during the panel discussion. At one point, the panelists describe which books got them interested in science fiction, and Jesse mentions that Illuminatus! was an important influence for him.

The Hook's major plot point involves using targeted assassinations of leaders trying to mount invasions as a method of self defense (as opposed to killing mostly-innocent people in huge numbers) and at 1:31 in the video, Jesse asks Longyear if that was inspired by Hassan i Sabbah, the historical figure discussed in Illuminatus!  Longyear gives a rather long and rambling answer and appears to confirm he got the idea from learning about Sabbah, although unfortunately he does not cite his source. (He admits he is not very good at keeping track of such things.)

Interestingly, Jesse traces where the Hassan i Sabbah element in Illuminatus! comes from. According to Jesse, Sabbah featured in a 1930s book which was a source for William Burroughs, and via Burroughs RAW learned about Sabbah.

Jesse did not identify the 1930s, book, but the Wikipedia entry on Burroughs' Nova trilogy explains, "The Nova Trilogy (as well as a passage in the book on the cut-up technique named Minutes to Go) feature the character Hassan-i Sabbah and his final words Nothing is true—everything is permitted. Burroughs was introduced to Hassan through Betty Bouthoul, who had written an extensive book on the assassins titled The Master of the Assassins (French title Le grand maître des Assassins)."

UPDATE: Jesse clarifies the 1930s book he had in mind was Alamut by Vladimir Bartol, available in English translation.

Lest you doubt my research skills, I will mention that Jesse's official biography states that he lives in Baltimore with his wife, two daughters and a rabbit. I can now reveal through extensive investigative journalism that Jesse's bunny rabbit identifies as female and is named "Kiki." 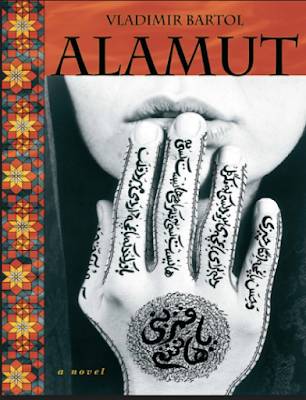 I love Alamut and actually bought a copy for one of my students at the end of last year. They emailed me from Turkey to say how much they enjoyed it.