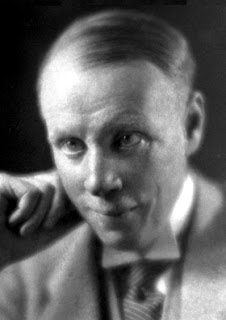 Among the various famous American writers who became prominent in the 1920s, I particularly like Sinclair Lewis. I have read many of his books, including most of the famous ones (still need to get around to Arrowsmith) and also many of the lesser-known ones (I am apparently the only person on Earth who thinks Work of Art, a novel about the hotel business, is a great book.)  Some of his books are available free at sites such as Project Gutenberg, including Babbitt and Main Street. I'm a member of the Sinclair Lewis Society and I get the group's newsletter.

Robert Anton Wilson records in Cosmic Trigger II that he read Sinclair Lewis when he was young; I don't know if he continued to read Lewis as he got older, as I do.

But here's something you might not have guessed: Sinclair Lewis was an influence on J.R.R. Tolkien.

Citing a 1977 biography of Tolkien by Humphrey Carpenter, the fall 2019 issue of the Sinclair Lewis Society newsletter says that Tolkien told an interviewer the word hobbit "might have been associated with Sinclair Lewis's Babbitt. Certainly not rabbit as some people think. Babbitt has the same bourgeois smugness that hobbits do. His world is the same limited place."