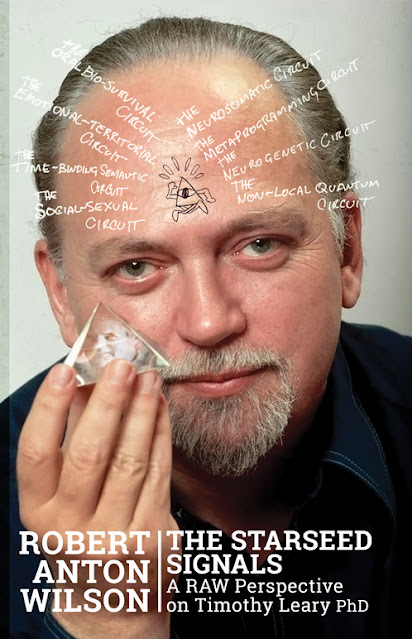 One of the mysteries involving Robert Anton Wilson's "lost" book, The Starseed Signals, finally published by Hilaritas Press in 2020, is what happened to the material in it.

Reading it revealed that much of it was repurposed into Cosmic Trigger 1.

And now the indefatigable Martin Wagner also has revealed part of the answer: Much of the same material in the book was used in a long, dense article on the Eight Circuit model, "Scientific and Experimental Magick," published in Gnostica in January 1975, and now reprinted by Martin on his website. The intro for the article says, "This article is taken from his incredibly popular series of lectures at the Gnosticon 4 last September," but if you've read The Starseed Signals, you also should recognize a lot of it.

For example, these striking sentences in the article also are found in the book:

Jacques Bergier has suggested, somewhat whimsically, that the Parisian radio station which broadcasts a one-hour transmission on French civilization once a week may be an earthside analog of magick/religious/UFO phenomenon. That is, some central “station” may be broadcasting a one-hour transmission on Cosmic civilization. Space-time relativity considerations make it not unthinkable that the Transmissions received on Earth in the past 30,000 years—by shamans, yogis, alchemists; Buddha, Jesus, Joseph Smith, Bohme, Blake, Crowley, Mary Baker Eddy; flying saucer “contactees“; etc.—are part of the same educational project. These Starseed Transmissions (as Dr. Leary calls them) suffer a great deal of semantic noise in passing through the nervous system which receives them, but remain strikingly identical in emphasis.

The Book of Mormon, Crowley’s Book of the Law, the Judeo-Christian Bible, the Upanishads and Vedas, etc., when closely and dispassionately studied, appear very much to be the same signal with encrustations of local prejudice, ignorance, bias and distortion.

I would disagree. We can see radical economic growth in Asia these days. These patterns still hold some validity.

Those old Gnosticas are a gold mine. Glad to see this make the light of day.