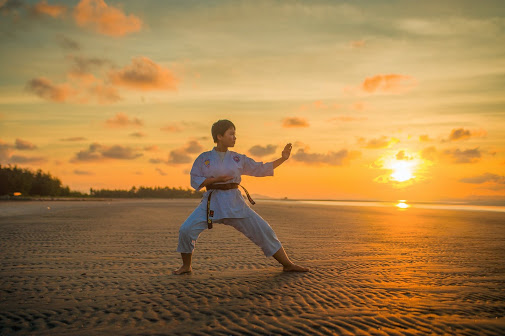 Rereading Prometheus Rising in 2000 I signed up for Chinese kenpo classes at Mr. Toppins’s East Wind Martial Arts in Riverside, California, and studied with a few interruptions for ten years. During that time I also had the opportunity to study with karate do with Dr. Hargis. In 2010 I had some knee trouble so I stopped martial arts for a while. In 2016, once again working on Prometheus Rising, I decided to study Yang long form tai chi (108 movements) with Mr. Toppins. That worked out much better for my knees, and I hope to continue practicing tai chi for the rest of my life. I finished learning the form in 2019, and I continued studying with Mr. Toppins until the beginning of the pandemic in 2020. I hope to continue my lessons soon.

For this run through of Prometheus Rising I decided to focus on tai chi for three months starting March 6, 2021. Fortunately I remember the form well enough to practice by myself without a teacher.

Well, today June 6 has arrived. I have practiced tai chi most days for the last three months. Reading this chapter of Prometheus Rising, I note on page 28 Bob suggests that “opium and its derivatives return us to the ‘safe space’ on the biosurvival circuit.” I suspect that binge eating also returns us to a similar “safe space”.

By the way, I got another new computer this week. My high school decided to replace all of our iPads with new ones. I find this an interesting synchronicity. When Tom, Apuleius, and I decided to start this Prometheus Rising study group, I had no intention of getting a new computer to go along with the exercise in chapter two. Instead I have gotten three. I wonder what other surprises we will encounter over the next sixteen months (and beyond).

“God wishes for you ease and does not wish for you difficulty.” – Quran 4:28

The recursive calls at the end of some exercises to “reread this chapter” like in exercises 4 and 7 in this chapter, could go on infinitely. One might take a three month course in kung fu, reread the chapter, reach the exercises and take a three month course in karate and read the chapter, etc. ad infinitum. This leads us to the metaprogramming circuit, what Bob calls the seventh circuit in this book.

I would like to visit the Long Beach Aquarium or Sea World after the pandemic and do exercise 6. I have visited some doctor’s offices lately that have fish tanks, and I have observed them very closely.

I got a chance to see my baby great-granddaughter on Mother’s Day 2021, but I didn’t think of exercise 7 from this chapter at the time. This reminds of in 1985 when my roommate Robert Rabinowitz left quarters on our driveway after I had left to go on a walk looking for quarters. By the time I had returned to the house my mind had wandered so much that I didn’t glance down and notice the quarters. Fortunately I got to see another baby granddaughter on Memorial Day and I did remember to keep the exercise in mind this time.

The opening quote in this chapter from Sociobiology by Edward Wilson points forward to the collective neurogenetic (morphogenetic) circuit, what Wilson calls the sixth circuit in this book.

I find it interesting that Bob mention UFO’s on page 28. As the pandemic enters its endgame, UFO’s have entered the news. I wonder how they will emerge as we continue working through the book.

The reference to how one can find people with negative first circuit imprints in fringe groups of the extreme Left and extreme Right on page 36 makes me think of the political world of the U.S.A. in 2021, January 6, in particular. Coincidentally, James Joyce’s great story “The Dead” takes place on January 6, 1904. I took Bob to see the John Huston film of that story in 1988

The discussion of the second circuit, walking, and “learning to manipulate others politically” reminded me of a story a ballet teacher told of her ex-husband as a teenager walking across his room listening to Beethoven’s Coriolan Overture imagining himself as a prince. In a few years he would get cast as a prince in traditional ballets.

Mike Gathers has observed the deep impact Freud made on Bob’s interpretation of the eight circuit model. I just reread Portnoy’s Complaint by Philip Roth getting ready for chapter five of Prometheus Rising. Freud’s impact on Portnoy intrigued me.

Bob Wilson imagines the imprints landing in quadrants of Leary’s Interpersonal Grid (or “cover two or more quadrants partly”). Mike Gathers has observed that Leary did not intend for this use of the Grid. Leary outlined a more complex system in The Interpersonal Diagnosis of Personality using a sliding scale for various areas of the Grid for clinicians and others to utilize.

I fear I usually fall in the hostile weakness quadrant. I hope my imprints become “a little less rigid, a little more flexible” as we proceed.

Really great write-up, thank-you Eric! Also love the photo, which suggests C5 transitioning to C6, to me, and the quote from the Quran. I've never studied the latter, but was looking through my beautiful Arabic/English edition the other day.

Related to the comment about radicals, I wonder if some of the covid vaccine hesitancy, or the general distrust of government comes from C1 imprinting issues.

Curious to try smoking opium once or twice, never have. Never desired to try synthetic opiates, perhaps due to a early imprinting-type experience. When I was 9 in 1968 my dad moved us to Palo Alto, CA, he was doing a year as a post-grad research assistant at Stanford. Drugs were everywhere, older kids tried selling sugar cubes of acid to the 6th graders. Us third graders learned a song sung to the tune of Frere Jaque: "Marijuana marijuana/LSD LSD/Scientists make it, teachers take it/ Why can't we, why can't we?

Over the course of 3 weekends my dad brought home 3 short drug propaganda films. The first one was either Reefer Madness or something exactly like it. I remember someone smoking a joint then wandering dazed into a tunnel of oncoming traffic. This kept me from trying weed until age 14 and only then after reading a lengthy scientific, fact-based article in a Canadian national news magazine about the dreaded plant. The second film concerned the horrors of acid with stereotyped images of trippers jumping out of windows from tall buildings screaming "I can fly." As a result, I've avoided tall buildings with open windows all my life and currently live in a town that don't have any. The third film illustrated heroin addiction; it seemed the most realistic one. I've never had much urge to try it despite its easy availability when I lived in New York in the late 80s/early 90s. I once got prescribed Tylenol with codeine for a bad, painful burn and tried one of two of them. The burn still felt painful, but I didn't care, it seemed detached from me. Also, I think reading Naked Lunch, in my early 20s reinforced my anti-opiate bias.

Great post Eric, thank you for those notes!
I like how once again you are making a transition between chapters.
My birthday was last week so I treated myself to some more books to fill up my shelves. So just yesterday I received a new copy of PR (so far I was reading the ebook, as I once lent my previous paper copy and it never got back to me), along with your Insider's Guide to RAW. I am very happy about it, looks like an invaluable resource.

I also spent time in an incubator right after birth, and asked my mom about it recently. She said she doesn't remember well, but that it was probably no longer than for a day, and she took me out often to feed me. I can't help but wonder how much this impacted on my being an introvert. I wouln't say at first glance that I have very strong first circuit imprint, but as you underline we aren't often the best judges for ourselves.

As I started to read Ishtar Rising, I noticed that entire paragraphs have been re-used in PR's chapter 3. Makes me think that it is good timing for this specific book.

Happy Bloomsday! Thank you for the kind words. I bought my VHS copy of “The Dead” from a box labeled “Bad Movies $2” at a science fiction convention. For years I would have a party on January 6 and we would watch the film.

@BFHC, the Kindle of Eric's book is quite cheap. I carry a copy of it around on my phone for quick reference!