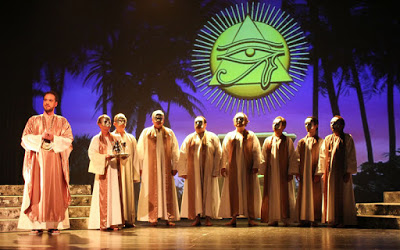 Scene from a production of The Magic Flute; note the eye in the pyramid.

Author and composer Jan Swafford's book, Mozart: The Reign of Love, which came out in December, went on sale on Kindle recently and I grabbed a copy. I looked at it on my Kindle, and it was so interesting I have begun reading it.

I read Swafford's excellent book on Beethoven and also his Language of the Spirit: An Introduction to Classical Music but the Mozart book, at least in the early going, seems even better; Mozart is arguably the most brilliant composer of all time, so perhaps that has inspired Swafford.

Swafford's Mozart book is relevant to RAW fans, and not just because of RAW's interest in Mozart and classical music. Swafford's book took seriously Beethoven's ties to the Illuminati. (Wilson maintains that Beethoven's role in the Illuminati in Illuminatus! was simply a joke, and that he only learned later it had a basis in truth.)  The Mozart biography appears in the early going to be sensitive to Mozart's relationship to Freemasonry.

In his introduction, Swafford writes, "There is a tendency in writing about Mozart to treat the operas as if he wrote the libretto as well, as if the text represented his own convictions and artistic statements." The content should really be attributed to the various librettists, Swafford writes. But he adds that Die Zauberfloete (i.e., the Magic Flute) is an exception; Mozart was involved in the libretto from the beginning, making it in Swafford's opinion "the most truly and thoroughly Mozartian opera." It is also an opera influenced by Freemasonry, although I haven't gotten to the portion of the book discussing that.