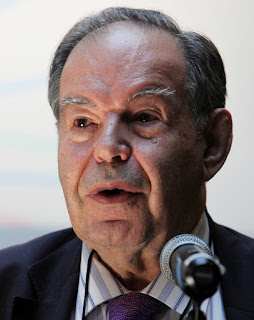 In one of his better-known essays, "Between Left and Right: A Non-Euclidean Perspective," (reprinted in Email to the Universe), Robert Anton Wilson offers this formula of "maybe logic":

"In modern mathematics and logic, in addition to the two-valued (yes/no) logic of Aristotle and Boole, there are several three-valued logics (e.g. the yes, no and maybe Quantum Logic of von Neumann; the yes, no and po of psychologist Edward de Bono; etc.), at least one four-valued logic (the true, false, indeterminate and meaningless of Rapoport), and an infinite-valued logic (Korzybski). I myself have presented a multi-valued logic in my neuroscience seminars; the bare bones of this system will be found in my book, The New Inquisition. Two-valued Euclidean choices — left or right of an imaginary line — do not seem very 'real' to me, in comparison to the versatility of modern science and mathematics."

Maltese doctor and author Edward de Bono, mentioned in the passage, has just died at age 88. He originated the term "lateral thinking." Here is his obituary from the Guardian.

If Brian from RAW Semantics is reading this, we find RAW talking at lenghth about de Bono and the use of Po for creativity in The New Inquisition.

@BFHN: Yes, Brian tracked it down and did an update on Twitter, which I've linked to in a second update. Good catch on your part!