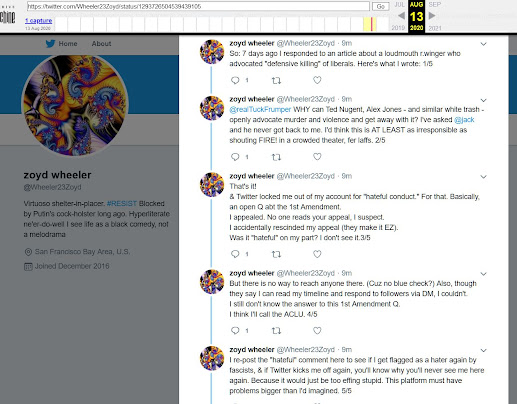 [Update: Michael weighs in below, in the comments; for a comparison, see Boing Boing's report on Naomi Wolf's ban from Twitter -- The Management.]
Michael Johnson, the great scholar of Robert Anton Wilson, has been "permanently suspended" from Twitter for allegedly violating Twitter's rules. It happened in August 2020, but I only found out it about the other day after reading Tweets from Prop Anon.

Michael is one of the best writers on RAW I know; see for example his introduction for the Hilaritas Press edition of Email to the Universe. Eric Wagner refers to him as "Doctor Johnson."

I had to work to figure out Michael's exact Twitter handle (when they "disappear" you, you are hard to find) but some research apparently establishes that @Wheeler23Zoyd is correct; see the image above (via @RAWsemantics). I have written a polite letter to Twitter asking for Michael's reinstatement.

I don't agree with Michael's remarks, below, about his blog (everyone I knew personally who read it loved it) and Michael has a standing invitation to do a guest post here.

I asked Michael some questions about all of this:

RAWIllumination: What account was suspended, and when was it suspended? Has Twitter offered since then to reinstate you?

MichaelJohnson: I was @ZoydWheeler (with a 23? I forget) "Zoyd Wheeler" is one of my favorite characters in all of Pynchon - Vineland - and I sort of feel akin to him. [See above.]

MJ: I have not set up another Twitter account because they say if you try to do that after being suspended for "hateful speech" they'll catch you. I don't want to have anything to do with those people and their algorithms.

RAWIllumination: Is there anything left out of Prop's account that you want to clarify?

MJ: I only read what you linked to. I'm not sure what else he related (or why, really), but I asked a Q about the First Amendment. I genuinely never understood why right wingers got away with advocating murder. I wanted someone to explain it to me. The reasons I found in article online "law" sites were unclear to me. Or unsatisfactory...After I asked the Q and Twitter suspended my account for a week, as soon as I got back on I asked my followers what was "hateful" about what I'd written, and I pasted exactly what I'd said. Twitter immediately permanently suspended me.

I tried to go through their "appeal" process. About 8 times. They ask you to explain why you think you were wrongly suspended. I'm now convinced there were no actual humans who read my appeals. For reasons that seem obvious to me, and I hope, you too.

When I clicked on the link you sent me, I got the ubiquitous blue box, that tells me I've been suspended and am not "permitted to perform this action." What action? Reading Twitter? Further: they periodically send me email telling me I've been suspended for hateful speech. I had given up trying to recover my account by October. (I was suspended in August of 2020.)

Since then, I've read a lot of articles from people who were suspended from Twitter, but it was always threatening to kill someone - only they were obviously kidding - stuff like that. They either 1.) eventually got their account back, or 2.) gave up, like me.

A lot of people have said to me "You're better off anyway." Other times I get some version of "They only care about the celebrities who make them money." I actually don't know. I do wonder.

I've tried to get hold of a human being at Twitter: no way. It's impossible. (At least anyone who has anything to do with this "problem.")

Oddly, PropAnon emailed me about what they're saying on Twitter about RAW and I told him my story. Then I resumed reading Seth Rogan's new book, Year Book, and the new chapter was titled "Verification" and it was about Twitter's amplification of antisemitism and Neo-Nazis. Being a big celebrity and being followed by Jack Dorsey, he DM'd Dorsey about the checkmarks next to vile Nazis. (Turns out, if you're verified with the blue check mark Twitter amplifies your reach; don't ask me any more about it.) They even talked on the phone. Dorsey kept saying, "We're going to fix that." Variations on that. He kept punting. Rogan was a few blocks away from the Pittsburgh synagogue the day some Dump supporter murdered the Jews there. Rogan reminded Dorsey that a certain vile suppository who happened to live in the White House was violating Twitter's TOS every single day. Dorsey, "Yea, it's a problem." Only after Jan 6th did Dorsey actually do anything.

RAWIllumination: Do you plan to resume new posts at 'Overweening Generalist"? Do you have another platform out there you want me to point people to?

MJ: I don't plan to resume OG. I haven't looked at that site since I last posted, after Dump's win. It feels like 20 years ago. No one read that shit anyway. I don't know who I thought I was going to impress or entertain. I have no other platform I want other people to go to.

Thank you for sharing this. I love Michael’s writing, and I love his Overweening Generalist blog.

I also love his writing and the OG!

This is unfortunate and I don't disagree that the Twitter rules are inconsistently applied. But "I should be allowed to use hateful slurs and I don't see the problem" is a weird hill to die on. It's not an unreasonable standard to ban the use of slurs like he used.

Just want to note I wasn't able to approve comments for a few hours, and I believe Lvx15 is responding to Bobby and Eric, and not to Mr. Hand.

I miss the OG blog. I loved his posts, and hope he starts writing again somewhere, if not the OG.

Correct. Serves me right for being so agreeable... but now I’m curious, what slurs?

Oh wait! Was it him saying "white trash" that did it?
I read his tweet like a dozen times looking for a slur.

If so, very interesting! Having grown up that way, it took me forever to even consider it, and even still I think I might be missing something!

Would be a bummer for the OG to get the boot over a misunderstanding with an automated system.

It's kinda neat to encounter a new social convention, and get to be Archie Bunker for a brief knee jerk reaction formation, but all things are impermanent, and I can dig it :)))

> I should be allowed to use slurs but no one else should
Big brain stuff.

I miss the OG blog too. This censorship business is getting out of hand.Its the same on Quora now: dare to question the mRNA vaccines and you're treated as some kind of Satanist. Same if you mention Ivermectin. (some but not all drugs are approved by the hierarchy). SIGH

The Overweening Generalist was a must-read blog.

I too wonder why certain loudmouth losers can advocate violence and murder and get away with.

Hey y'all. Michael Johnson here. I read this post and the comments late last night before bed.


And a heapin' hearty bowl of thanks to all but one of you. I've met none of you in what we so laffingly used to call "RL," but it does feel like some friends stood up for me.

(Those 8700 "friends" you have on Facebook will NOT get out of bed and come help you fix a flat on the freeway at 3AM, as you know)

As I just now what to Prop in an email:

Since the first suspension, all I could guess was that "white trash" was what their algorithm thought was "hateful speech." But...I've grown up with white friends calling themselves or their friends or parents that. I've told friends that my own family was "sorta white trash." Because we were poor and my mom was mentally ill and we ate terribly because she didn't know how to cook, and my and my brothers had hair down to our asses and we skipped school all the time because it bored the crap out of us, etc.

I remember reading a line in a book as a young kid - it was The Encyclopedia of Rock by Nick Logan and Bob Woffinden - one of those books a kid might obsess over. I studied that book like the Torah. Anyway, under the entry for Grand Funk Railroad, Rod Stewart was quoted as calling them "the all-time white trash band." In this sense, "white trash" was a viable AESTHETIC CATEGORY.

And I loved Edgar Winter Group's instrumental, "Frankenstein" and learned it for my first rock band. Edgar Winter - who was albino - had an album called White Trash, with Rick Derringer and Edgar's legendary bluesy brother Johnny Winter playing guitar on it.

When Roseanne was an upcoming stand-up comic, she often made jokes about how she and her family were white trash. I just don't see it as "hate speech" at all. But maybe others do. News to me. If so, I'd really like to see a list of terms that could get you suspended. If "white trash" is one, the list must be 28,000 items long.

In my semantic meaning of "white trash", calling Alex Jones and Ted Nugent that? I'm actually using the rhetoric of understatement, eh?

EX:
"I mean, look at Himmler, Goebbels and Goering: they were pretty mean to the Jews, too."

In what sense are Alex Jones and Ted Nugent - both loopy racist and fascists who've openly advocated murder of "liberals" NOT "white trash"?

The term "red neck" has long been used proudly by those you and I would call "red neck." That's even more of a bridge too far than "white trash."

Naw: I find it hard to believe I got suspended for "white trash." I think there might be some glitch in their algorithm, and "advocate for murder" with "liberals" coupled with "Alex Jones" might have algorithmically flagged me as a dangerous, hateful deplorable one indeed.
-------------------
I ended my email to Prop by linking to another of my cultural heroes - and he's still alive, thank Goddess - David Simon.
David Simon - who's still on Twitter, 'cuz he done be famous an' onna teevee and like dat 'n stuff - speaks to me here:
https://davidsimon.com/a-fuckbonnet-for-our-time/

Just want to chime in to mention that the OG blog was always a must-read for me and I still go back and the read the archives nowadays.

And I didn't know OG MJ was the mastermind behind the Zoyd Wheeler twitter account. Free the OG/MJ/Zoyd Twitter! Vineland is a great book btw. I just finished reading "Vineland Reread" by Peter Coviello and it was superb, highly recommended.