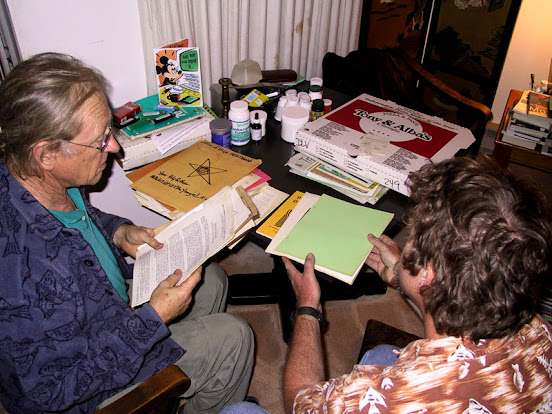 Discordian historian Adam Gorightly has a new post up, "The Origins of the Thornley/Oswald Manuscript," which explores  Kerry Thornley's relationship to A.J. Weberman, the famous Dylanologist.

Young people reading this blog entry may not recognize the name, but Weberman is famous for being the Dylan scholar who performed his research on Bob Dylan by going through the singer's trash can.

It turns out that Weberman also was a John Kennedy assassination conspiracy theorist. So a letter from Weberman to Thornley, reproduced by Adam, includes the statement that, for a long time, Weberman was afraid of Thornley. "But your letters have convinced me you are sincere and are one of the innocent bystanders CIA agents working for Garrison dragged into this mess to discredit Garrison's important discoveries," Weberman writes. The sentence refers to Jim Garrison; if you follow the above link, to Wikipedia's article about Weberman you can read about Weberman's book, Coup D'Etat In America: The CIA and the Assassination of JFK. In the same letter, Weberman asks Thornley, "What do you think of Dylan?"

If Adam's blog posts whet your interest in Discordianism or Kerry Thornley, please go here to read about books Adam has written, making good use of the Discordian Archives that Adam maintains and explores. (I have read all of those books.)  Given the failure of Robert Anton Wilson and Robert Shea to maintain their own papers, the Discordian Archives are an important source of documents about both writers; they are the source, for example, of the Hilaritas Press publication of Wilson's lost book, The Starseed Signals.