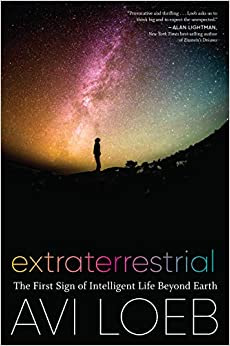 I spent the last few days listening to an audiobook of Extraterrestrial by Avi Loeb, and it was quite interesting.

Remember Oumuamua, the mysterious object that zipped through the Solar System in 2017?

Astronomers determined that it was the first interstellar object they had detected, and Loeb, an astrophysicist and the chairman of Harvard University's astronomy department, came up with a theory to account for Oumuamua's unusual characteristics: It was a a solar sail, made by an alien civilization. (A solar sail is made of very thin material pushed by solar wind, i.e. particles from a sun, much as wind pushes a sail on a boat.) Loeb said Oumuamua's location versus other stellar objects could mean it functioned as a kind of buoy. Or it could have been discarded junk, much like a plastic bottle one finds on shore.

Scientists have not exactly embraced the theory; here is the reaction from Paul M. Sutter, astrophysicist at Stony Brook University.

Loeb argues his case well; I'm not an astronomer and all I can say is that he seems to make a plausible argument but many scientists don't buy it and continue to think Oumuamua was a natural object. Loeb insists his theory has not been embraced because most scientists are too conservative; in the book he perhaps compares himself to Galileo a few too many times.

The book offers a brief history of the search for extraterrestrial intelligent life and discusses the idea of panspermia, the idea that life on Earth was seeded from somewhere else, topics that fans of Robert Anton Wilson and Timothy Leary might be interested in.

I have one gripe with Loeb. Many of his ideas echo ideas articulated years ago by the science fiction writer Arthur C. Clarke. One of Clarke's better known novels, Rendezvous With Rama,  tells the story of an alien spacecraft, apparently uninhabited, that passes through the Solar System. One of Clarke's short stories, "The Wind from the Sun," popularized the idea of a solar sail. Loeb also suggests the Moon would be a good place to look for alien artifacts, reminiscent of Clarke's short story, "The Sentinel," in which a lunar object serves as a kind of alien alarm, alerting whoever put it there that man has developed far enough to travel from our home planet. (The story was the basis for 2001.)  See also on Wikipedia for how Clarke came up with the idea of a system for spotting asteroids in the Solar System. I'll bet there are other echoes of Clarke's ideas I simply missed.  Loeb never mentions Clarke, or has anything good to say about science fiction, and that seems churlish and ungracious.

You can read Tyler Cowen's review. (He finds alien origin "unlikely" but apparently enjoyed the book.)