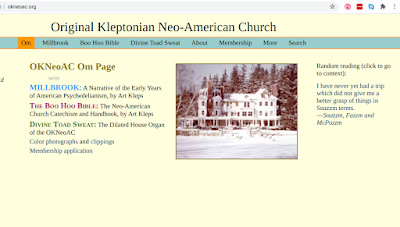 Adam Gorightly has an excellent new post up at Historia Discordia, RAW vs. the Acidheads for… ONE MILLION DOLLARS! which includes a clipping from "National Weed," a newspaper I am unfamiliar with,  “Author Sues Acidheads For Saying Leary Wrote His Book!” The article does not actually announce a court filing, and Adam says, "In essence, this article appears to have been a PR prank Robert Anton Wilson pulled as a pretext to promote Illuminatus! while at the same time taking a pot-shot (pun intended) at members of the Neo-American Church, who — on occasion — RAW was known to tussle with."

Adam's posting also has a possible clue to the contents of the impending publication of The Starseed Signals: Link Between Worlds.

"This article also mentions a Timothy Leary interview RAW was working on that had yet to be published at the time due to what he referred to as 'perfectionist' editors at PLAYBOY. This “Lost Leary Interview” — which has yet to see the literary light of day — was among content included in the RVP-never-to-be-version of Starseed Signals, although I’ve been informed that our friends at Hilaritas Press may include it in their forthcoming iteration of the book," Adam writes.

His post also includes a letter to the editor written by RAW, involving a feud between RAW and the late Art Kleps.