Thanks to everyone for New Trajectories 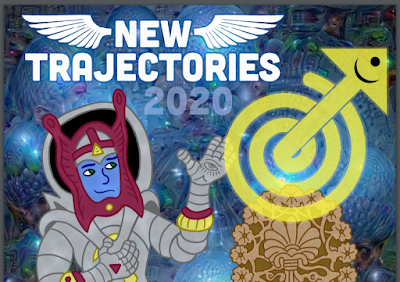 New Trajectories, the big zine put together by Bobby Campbell for Maybe Day, clocks in at an impressive 77 pages. But like the tesseract home in the famous Robert Heinlein story, "--And He Built a Crooked House--" those 77 pages have a lot more in them than you might realize. Like a link to a YouTube playlist of Robert Anton Wilson inspired songs, a link to a Mike Gathers minibook, a link to the first chapter  of Steve Fly's new novel, and so on.

All of the Maybe Day work put in by RAW fans seems particularly impressive to me when you consider we're not getting a lot of help. We don't get money from the government or from arts foundations. Academia doesn't seem to be interested in RAW. We can't even get much publicity; Boing Boing, for example, has had nothing about the upcoming Hilaritas Press edition of Starseed or about Maybe Day. Maybe it's not the right time to try to stoke interest in a dead white male, although I'd point out that RAW didn't come from a wealthy family, and Irish Americans were once a marginalized group.

In fact, New Trajectories is so impressive, many of us seem to be a little worried he/she/they didn't measure up. One friend described his contribution as "super rough." Another worried his contribution wasn't original enough. I worried about my Bob Shea piece, but it was sincere.

Everyone, you did well! Pat  yourself on the back!

Iain Spence: I really like the New Trajectories, although I'm now feeling kind of guilty for not having offered an article for possible inclusion. I especially like the whole art & layout, like the rich dark graphics from pp. 24 to 31. The Bob Shea article was good too, something that RAW would appreciate I'm sure, as much as Mr Shea's family.
One of the highlights in the journal for me has to be Bobby Campbell's article on the Noid, and the story of RAW's gentle guide to diffusing the fear of Choronzon. Personal stories like this, they bring real colour and life to a zine.
Thanks to everyone for bringing this out : )

I absolutely loved putting this all together, and can't tell you how much I appreciate all the brilliance that was donated to this cause by all the contributors :)))