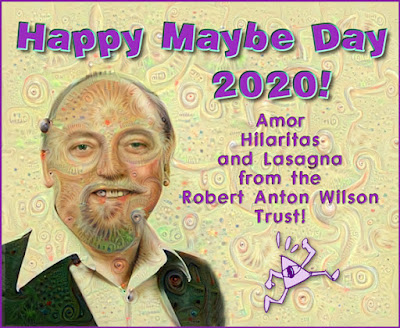 Bobby Campbell helps you celebrate the gala international holiday at MaybeDay.net with a 72-page PDF zine you can download and keep, his production of a 32-page document from Mike Gathers on the Eight Circuit model (also a handy PDF), videos from various folks and more! Go get your stuff! Find the others! (You will recognize many names and meet new friends.) All hail Bobby for his great work, and thanks to all of the contributors! (Above illustration chipped in by Rasa).

Addendum: Explanation of Maybe Day below. 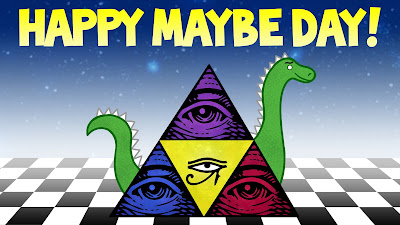 The day also recognizes the efforts to keep Wilson's work before readers, not just official efforts such the Robert Anton Wilson Trust and its Hilaritas Press imprint, but the informal but persistent efforts of a network of RAW fans around the world.

For reasons that are not easily summarized in a few words, July 23 is a notable day for many fans of Wilson; the significance of the date becomes apparent if you read Cosmic Trigger.

Maybe Day also refers to "maybe logic," Wilson's suggestion that many questions or assertions can be answered, not just with "yes" or "no," but with "maybe," and that many claims ought to be qualified with a degree or uncertainty. So, for example, if you say, "Maybe Robert Anton Wilson is an interesting writer and maybe he still deserves to be read," you are issuing an invitation, not asserting a dogma regardless of personal literary taste.

Been a fun day.

We had our Finnegans Wake reading group today and, of course on July 23rd the day the Dog Star Sirius is in alignment with the sun, the page we read had a few references to dogs, astronomy, and "Et Cur Heli!" which has a few connatations but includes dog (cur) and the sun (heli).

Thank you to Bobby Campbell for putting this together.

Thank you so much for your awesome contributions!

Maybe Day was a great excuse to get to collaborate with all of you,
and it was a total blast :)))

I just read Mike Gathers' microbook done in commemoration of Maybe Day -- Freud, Jung, And A Platypus Get an MRI, and I must say I think it was lovely!

I have never read a treatment of the Eight Circuit Model that so deftly interweaves Freud, Jung and contemporary neuroscience. Just for the neuroscience alone I was grateful, but in illustrating the interleaving facets of the work of various pioneers, as well as modern science, I was spellbound. The commentary about the wiring of the brain and the complexity of imprinting -- and how it does not always take place instantly -- is fascinating.

I hope to see some more of Mr. Gathers' ideas in the future -- they're marvelous!