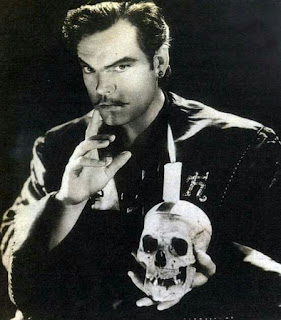 Thank you for all your posts, Gregory. In the nineties I gave Bob a VHS tape if “Black Magic”.

Our journey concludes, and we are hanging from a cliff. Once again, Gregory offers a wealth of historical background, most of it new to me. Thank you for conducting us.

I’ve been pondering Tom’s question from last week. I don’t think the series was running aground, but maybe it was coming apart; there were more and more threads to pull together, and maybe that was why there was no fourth volume. That’s pure guesswork, though.

I have more confidence in a conjecture I have offered here before: RAW was repeating the old HC trick from Illuminatus! and SB was Sarah Beckersniff, Maria’s nom de plume. (The mysterious agents who got in when “no one” was seen were women.)

Welles actually appears as quite the occultist in that photo. He wears a black robe with the sign of Saturn, holds a skull (Saturn as the god of time is associated with death), and makes the Binah (sphere of Saturn) appropriate symbol of silence. I didn't realize that until looking at the photo now.

I think that Welles portrayal of Cagliostro might be a close depiction of how Sigismundo would appear around the time of "The World Turned Upside Down."

@Supergee, I like the theory that SB is Sarah Beckersniff, but what do we make of the statement that Sigismundo was at the party? Is he one of the characters who we see at the party?

I am frustrated at not knowing what calamity befell the Babcocks. Perhaps one of Bob Wilson's confidants, such as Eric or Rasa, thought to ask?

"I adore fashion. After all, it is all the saves us from the tedium of good taste and the monotony of common sense. The more outrageous a new fashion is, the more exciting I find it."

Great history lesson in the OP, thanks again! I find it an interesting synchronicity that the post ends with "Aum Ha" and wonder how knowingly intentional you made it with the Qabalah at the close of Nature's God? Aum Ha, of course closes The Book of the Law :

"The Book of the Law is Written
and Concealed.
Aum. Ha."

The final sentence of our beloved novel and series:
"The contest will be formidable" The Notarikon of it:
T + c = 17 + w (will, which started the book) = 23 + b = 25 + f = 31. 31 = the key to The Book of the Law . This got discovered by Crowley's magical son, Frater Achad, who we've seen references to in this and other RAW novels. My interpretation/speculation as to why RAW closes the book (and, as it turns out, the Chronicles) with this Notarikon - inside this novel and this series, you will indeed find a key to Crowley's presentation.

p.215: "Exquisitely contrived fantasies of all sorts have a transcendental radiance about them. It is my misfortune to have the task of looking behind every masque to see what the actors are really hatching. I repeat that I am cursed with the necessity of realism." This seems a little paradoxical - fantasies and realism. I also relate this to the Qabalistic subtext fantasies I've been outlining through the course of these readings - all illusions ... back to sleep. The most famous of Crowley's comments on The Book of the Law known as the Short Comment begins with:

"The study of this Book is forbidden. It is wise to destroy this copy after the first reading.
Whosoever disregards this does so at his own risk and peril."

p.211, the first page of Chapter 11 ( 11 = the number of magick, energy tending to change): "... the cunning little spy-master whose role in the government was increasingly undefined but distinctly growing in power every time the moon changed." This recalls the "will to power" that starts the book. We saw the symbolism of the moon change in Chapter 9 (9 = Yesod = The Moon) when Seamus Muadhen (Moon) broke down into lunacy by the horrific events at the start of the chapter while Maria assumed her post as High Priestess at the close of the chapter. The High Priestess = the path of Gimel = the Moon in a more positive aspect.

Bob Dylan was asked if he was thinking of a past golden age when he wrote his recent epic Murder Most Foul about the JFK assassination. He answered no, not at all, he was thinking about the present moment. I considered Nature's God relevant to the present moment especially with the spooky mention of the current year in the Wilderness Journal. I hope we grow in power to change the moon of now from the current lunacy and lunatic fringe to the reflected light along a path aspiring to higher consciousness. The last sentence of the book again: "The contest will be formidable," also seems a pun with the present moment. The contest against an alien intelligence, the Covid 19 virus; the contest against a racist, selfish, and treasonous president and the ignorance that enables and supports him. More on the optimism and hope encoded in the final sentence when time permits again.

If memory serves, someone here claimed to have heard from RAW himself about future plans for the series, including that the message at the end of the book was John Babcock’s death, thus enabling Sigismundo & Maria to wind up together a couple of volumes later.

No idea whether Sigismundo is one of the people in the final discussion. The girl’s father seems to be the only male speaking character who is not identified as someone else.

The last word of Nature's God, the third book of the Historical Illuminatus Chronicles is "formidable" - "The contest will be formidable."

On the news tonight they said something to the effect that chances increased significantly today that we would have a covid 19 vaccine for public distribution by early 2021. 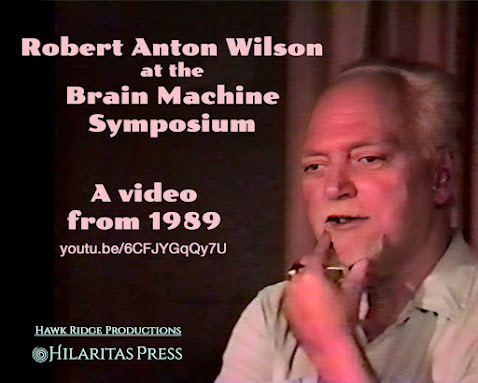