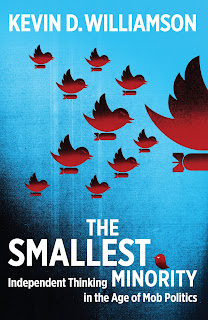 I recently interviewed the writer Kevin D. Williamson, and you can read the interview here.  It's one of my favorite author interviews for the paper, and Williamson could not have been too unhappy with it, as he did a post pointing to it.

When I read his new book, The Smallest Minority: Independent Thinking in the Age of Mob Politics, I was surprised that in a couple of places, he sounded like Robert Anton Wilson. This is apparently because they both favor freedom of speech, and both cite James Joyce as an influence, but it was nonetheless kind of surprising. Here are a few sentences from the book to show what I mean:

Those who defended the free speech of Communists in the 1950s were derided as fellow travelers, and those who defend the free speech of neo-Nazis, pedophiles, or other detestable characters today are smeared in the same way. The case for toleration is never more than an inch away from being suffocated by the desire to punish. And those who will not serve the desire to punish are cast out as heretics. The desire to punish comes in many forms -- political, religious, social -- but it is always and everywhere the same in its demand for obedience and service ... "Non serviam," Lucifer said, "I will not serve." These are the words that supposedly led to the brightest angel's expulsion from heaven. (Page 200).
on October 17, 2019

I'm re-reading Prometheus Rising and am struck by how strongly RAW's case for Open Societies resonates with me. Preventing noxious speech and squelching even the most crackpot ideas seems to me the surest way to delay progress.

I've gone through a bit of a spell over the past few years where I felt like I became part of the Shout 'Em Down crowd, and regret it very much.

One modern-day talking head who brought me out of that spell is Bill Maher. For all his faults, he is, at times, an incredible proponent of free speech. I recommend his last few episodes of Real Time for a flavor!

Bill Maher is a favorite of mine too. I also recommend seeing the last couple of shows particularly the interviews with Salman Rushdie and Howard Stern. The Stern one is more personal, less political, but goes way outside the box of these kinds of interviews. The Rushdie one is notable for his solution to the worlds problems given toward the end of the interview. I feel the same way. 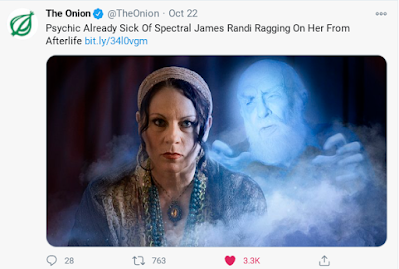