A Broadway musical: 'The Golden Apple' 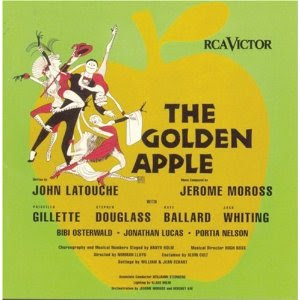 1954 original cast recording of highlights from The Golden Apple

Here is something I had never heard of before, until yesterday, when I was listening to "Footlight Parade" on WCLV, the Cleveland classical music station: In 1954, an acclaimed musical was produced on Broadway, "The Golden Apple," based on the Iliad and Odyssey, although it is set in the state of Washington in the early 20th century and involves a traveling salesman named Paris and an apple pie baking contest.

The useful Wikipedia article reveals that the musical was not particularly a hit but received rave reviews and good press coverage and at least one major award. (The lyrics were by John Treville Latouche and the music was by Jerome Moross. Moross also was a successful film soundtrack composer.)

The musical has periodically been revived and in 2015, the first recording of the entire musical was released.

I would assume that Robert Anton Wilson was living in New York City in 1954 and that being culturally aware, he had heard of the musical.

The original cast recording is on Freegal, the library musical service, so I'll download it and check it out.
on October 06, 2019