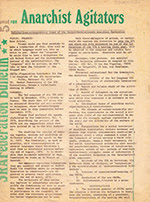 Another nice Martin Wagner discovery: Letters from RAW to the "SRAFederation Bulletin for Anarchist Agitators."

Five letters are reproduced. Here is a bit from the "Spooner-Tucker Anarchism" letter:

Bob Shea objects that, since I have rejected anarcho-capitalism and anarcho-royalism, as self-contradictory, I should also reject an anarchist army as self-contradictory. Not at all; it depends on how one defines anarchism. Shea, in his next sentence, defines anarchism as non-coercion, whereas I, following Tucker, define it as non-invasion. A's right to swing his fist ends where B's nose begins. If A refuses to recognize this limit and insists on swinging until B's nose is hit, A has become invasive in the Tucker sense. In ending the invasion, B may be as "coercive" as she pleases without becoming "invasive" in this meaning, since B is resisting invasion. Multiply A by 10,000 and you have an anarchist army. Both are equally coercive, A on behalf of their right of "right to invade" and B on behalf of their "right to be let alone." The former right I deny; the latter right I endorse.
on October 09, 2019