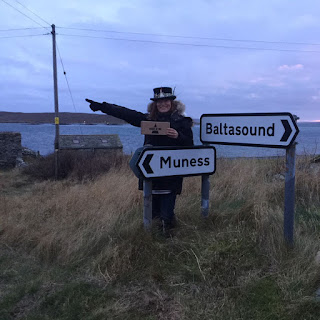 Daisy Eris Campbell, pointing the way for the rest of us.

Daisy Eris Campbell is organizing a pilgrimage to CERN and Switzerland next spring, and everyone is invited to come along.

As I blogged recently, Daisy gave a long interview recently to a theater writer at a Glasgow newspaper. In the article, she mentioned her interest in synchronicities:

This idea of synchronicity and meaningful coincidence was first coined by Swiss psychiatrist Carl Jung, whose well-documented dream of Liverpool was one of the inspirations behind the Liverpool School of Language, Music, Dream and Pun, where Illuminatus! was first performed. A bust of Jung by David Wright is set against stone taken from Jung’s house in Basel. Campbell is planning a pilgrimage to CERN, the Geneva-based centre for research into particle physics and the make-up of the universe.

“I feel it’s time to return a gift to Jung,” says Campbell, who is planning a trip with Liverpool Arts Lab, direct inheritors of the spirit of the old Mathew Street centre. “Again, why? We don’t really know, but it feels necessary.”

Daisy has now fleshed out her plans in her latest email newsletter, available here.  Excerpts:

First thing to consider: This will be a true pilgrimage - i.e HARD. It'll involve camping in mountains in April. It will be intense and in tents. You have been warned.....

For Illuminatus scholars you'll know that April 23rd was the day that they immanentised the eschaton. You'll also know that Eris was birthed in the UK via Illuminatus, staged on the site of Jung's dream of Liverpool - and given (as Alan Moore pointed out at the last performance of Cosmic Trigger) that all the current chaos and confusion has stemmed from muddling up the words 'immanentising' and 'immanantising' - it stands to reason that we must be at CERN to immanantise the eschaton on April 23rd, thus re-setting the world and ushering in the age of Grummet.

The price cannot be 100% fixed until we know numbers - but a pretty close guess is £369 per person. This covers minibus & petrol, Eurostar, camping and all entrance fees etc. It is very unlikely to go up beyond £400.

The deadline for expressing interest is Dec. 23.

Have you already posted re: