Okay, okay, I was wrong 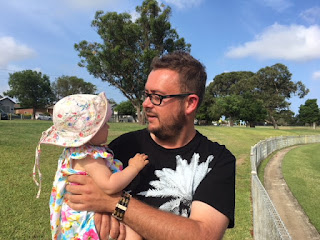 Gordon White, author of The Chaos Protocols (which I liked), holding his niece on Twitter.

My wife is a librarian, so obviously she knows a lot about books and authors. (Give her any topic, and she can tell you exactly where a book is filed under the Dewey Decimal system.) But she tells me she never heard of Robert Anton Wilson, and none of the librarians she works with knows who he is.

My wife's library has a blog, Read It Or Weep, and several staff members at the library have been posting their "best books" of 2018.

Ann is an expert on mysteries, and you should read her entry if that's what you like, but what I also noticed was that a guy named Greg recommended The Chaos Protocols by Gordon White. He also recommended The Invisibles by Grant Morrison and Promethea by Alan Moore. His review of The Ballad of Black Tom showed that he was very familiar with H.P. Lovecraft.

With the assurance of an EXPERT, as Robert Anton Wilson would spell it, I told Ann that this guy was probably a Wilson fan, or at the very least would know who Wilson was. So she went up to him and said, "I need to ask you something. Do you know who Robert Anton Wilson is?"

The guy looked at her blankly and said, "Should I?"

I still think I should have been right.

Buy him a copy of the soon to be re-published Cosmic Trigger II--that should keep him occupied!

Good idea, I think I likely will!

I think odds were in your favor... his situation needs to be rectified. But this begs the question, if you have only one shot at making a RAW fan out of someone, what book do you recommend? Of course the answer depends on what you know about that person... based on that dude’s recommendations I’d suggest Masks of the Illuminati.

Masks of the Illuminati is indeed a good recommendation. I guess it might depend on whether the fellow leans more fiction or nonfiction. I do like Cosmic Trigger 2 as an introduction to Wilson, and it's a personal favorite of mine.