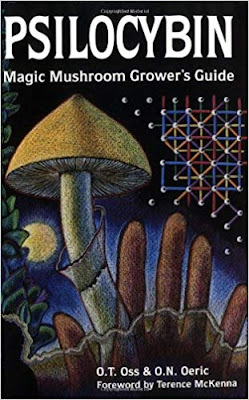 A couple of excerpts:

Only narcs and the major drug dealers, that oddly symbiotic alliance, can possibly oppose the self-evident intent of the authors, which is to teach the reader how to make pure, undiluted, 100 percent safe neurochemicals at home, and thereby avoid the hazards of the black market.

It is indeed a splendid dream. Imagine: every Head in the country begins growing his or her own magic psilocybin mushrooms. Funny fungi sprouting everywhere. Millions, then billions of golden-headed darlings bringing the most ancient Mayan secrets to meta-phase nervous systems, coast to coast. The local distributor of mescaline-cut-cut-with-garbage, which he calls LSD, pounds on the door desparately, “Hey, I’m selling blotter at 10 cents a hit this week” — and nobody answers.

The only thing wrong with this book, aside from the price, is that they forgot to mention that you should always absolutely in every case whatever the circumstances play Beethoven’s Ninth during the third hour of the mushroom experience. With earphones and your eyes closed. Then o dearly beloved may you find the Gold of the Philosophers, the Stone of the Wise, the Medicine of Metals, the Rosy Cross, True Wisdom and Perfect Happiness. Io Pan Io Pangenitor Io Panphage Hagios Hagios Hagios IAO.
on December 09, 2018