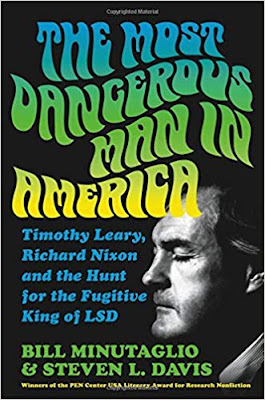 I've simply listed my favorite reads, including books that were not first published last year. Also controversially, I have actually waited until most of my reading for 2018 was concluded, rather than posting my "best" list weeks before the end of the year.

For each, I've listed the title, author, and year of publication, with a brief note.

1. The Powers of the Earth, Travis Corcoran. 2017. A science fiction novel set on the Moon. It won the Prometheus Award, and it was so good, I was sure it was going to win.

2. The R.A. Lafferty Fantastic MEGAPACK, R.A. Lafferty. 2016. Very early stories, and I wondered if the editing criteria was, "These are public domain stories we don't have to pay for." No matter; many of Lafferty's best stories were the early ones, and this is a great collection. Under $1 for the ebook.

3. The Overstory, Richard Powers. 2018. Who knew you could write a great novel about trees?

4. The Saracen: Land of the Infidel, and The Holy War,  Robert Shea. 1989. Very good historical novels set in medieval Italy.

6. The Most Dangerous Man in America: Timothy Leary, Richard Nixon and the Hunt for the Fugitive King of LSD, Bill Minutaglio,  Steven L. Davis. 2018. Come for the fast paced narrative, stay to learn about Leary, still a fascinating figure, and Nixon, arguably worse than Trump.

9. Chasing Eris, Brenton Clutterbuck. 2018. Could have used some editing, but the sheer work Brenton put into surveying the modern Discordian scene was simply awesome.

10. Cosmic Trigger 2: Down to Earth, Robert Anton Wilson. 1991. A re-read, of course. A nonfiction memoir that manages to read like a novel, and a good exploration of many ideas. One of his best.

I also liked, among others, Pale Fire, Vladimir Nabokov, which also belongs in the Top Ten but I think was covered by the reading group; All the Beautiful Lies, Peter Swanson; The Night of the Gun, David Carr, and The Will to Battle, Ada Palmer.
on December 29, 2018

1. Vineland, and The Crying of Lot 49, Thomas Pynchon. I couldn't summon up the gumption to reread Gravity's Rainbow, so I reread these instead. I think Vineland is my favorite Pynchon book, and it seems quite prescient given the current political climate.

2. Lord of Light, and Creatures of Light and Darkness, Roger Zelazny. I reread half a dozen Zelazny books this year. These were my favorites.

3. Nova Express, William Burroughs. An "INTERESTING" book.I also liked The Yage Letters, by Burroughs and Allen Ginsberg, which deals with their travels in South America in search of ayuasca.

5. Tao Te Ching, Ursula Le Guin. She refers to this as a "rendition," rather than a translation.

7. Night Trade, Barry Eisler. Eisler is my favorite thriller writer and this one did not disappoint me.

8. Astrophysics for People in a Hurry, Neil DeGrasse Tyson. Listened to the audio version.

9. The Spy Who Came in from the Cold, John LeCarre.

10. My Back Pages, Steven Moore. This might be my favorite. A collection of essays and book reviews of a lot of writers I'd heard of and many more that I hadn't. I keep going back to it.

One final note. To me the biggest disappointment was James Heffernan's Nonlocal Nature. I thought he did a credible job discussing the first four circuits, but from that point on the book seemed to me to devolve into an "Eight Circuit Fundamentalism."

@Van Scott, thanks a lot of posting, and I would invite others to post their lists. I love Zelazny but I haven't gotten to "Creatures of Light and Darkness" yet. My favorite is "This Immortal" but I love a bunch of the others, too. I will try to get to some of the books you recommend.

If you (or anyone else) are on Goodreads, feel free to link up. I am "Tomj."

Thanks for this, Tom.

My 5 favorite reads this year:

1. A Little Larger Than the Entire Universe by Fernando Pessoa
Poetry collection. This became a desert island book for me. Some of these poems I come back to repeatedly, even recited some aloud to family during the holidays.

2. The Alphabet Versus the Goddess by Leonard Shlain
Extremely fascinating view of history, also the best application of McLuhan's dictum "the medium is the message" I could imagine. Brain surgeon Dr. Shlain views history as a shifting of dominance in the hemispheres of the brain brought about by literacy. Left-brain vs right-brain becomes Word vs Image becomes Man vs Woman. Sounds bizarre but Shlain makes a startling case here.

3. The Most Dangerous Man in America by Minutaglio and Davis
Was thrilled to see this part of Leary's career turned into a page-turner. Also thrilled I got to attend a book signing and talk to these guys about the good Dr. Leary.

4. "The Notecard Quartet" by David Markson
Wrote about this tetralogy on my blog. Markson became a favorite of mine this year. Truly unique style, very sparse yet very rich. Also I finally encountered someone who seems to love Finnegans Wake & Baseball as much as I do. (Sadly, he passed away.)

5. Power Ball by Rob Neyer
Very engaging and informative view of one modern MLB game from an author who combines a deep knowledge of baseball history, a close understanding of its current stats-drenched state, and a casual, easy-to-read writing style.

PQ, I was not familiar with David Markson until I saw the post on your blog, but I have made a mental note to check him out.