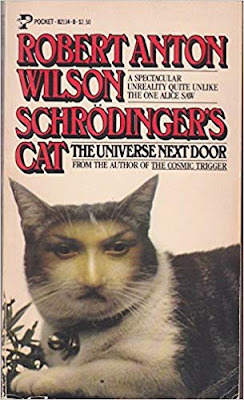 I've been re-reading The Universe Next Door, and I noticed this passage (in the "To Have Locks On These Doors" chapter, page 73 of the paperback edition pictured above):

Blake Williams had the great good fortune to suffer a bought of polio in infancy. Of course, he did not realize it was good fortune at the time -- nor did his parents or his doctors. Nonetheless, he was among the lucky few who were treated by the Sister Kenny method at at time (the early 1930s) when the American Medical Association was denouncing that method as quackery and forbidding experiment thereon by its members. He was walking again, with only a slight limp, when he entered grade school in 1938. The real luck occurred twelve years later, in 1950, when he was 18; the limp and the dead muscles in his lower calves disqualified him for military service. The next man drafted, in his place, had both testicles bloodily blown off in Korea.

Blake Williams often seems like a stand-in for the author, and like Wilson, Williams was born in 1932 and treated using the Sister Kenny method. But what about the avoiding the draft bit? Did Wilson indeed have a disability that allowed him to avoid being drafted during the Korean War?

I think so, but I don’t have a citation.

Or this might be a nod to one famous daoist tale about farmer's son.