Bill Drummond's pyramid of the dead 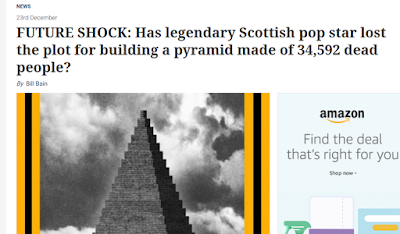 I've been waiting to run across a piece that would explain those puzzling references on Twitter to a pyramid of the dead, and now I've found it: An informative and amusing piece by Bill Bain, which has a title so long I won't reproduce it.

Mr. Bain wants to know if any of Robert Anton Wilson's ashes may be contributed to the project.

A bit from the piece:

IF you want to truly get lost down the rabbit hole, the internet is awash with dubious mythology concerning the number 23. Much of this involves mathematics, patterns, synchronicity and coincidence, such as babies getting 23 chromosomes from each parent, the arm having 23 bones and it taking 23 seconds for blood to circulate through the human body.

The idea was brought to cultural prominence by author William Burroughs and friend Robert Anton Wilson, who adopted the “23 Enigma” as the main theme of his hit Illuminatus! trilogy. Yet even Wilson once said: "When you start looking for something, you tend to find it.”

And taking this questionable calculation to its natural conclusion, 2 divided by 3 is, wait for it – .666. So a very happy Antichristmas to all this column’s online readers.
on December 27, 2018