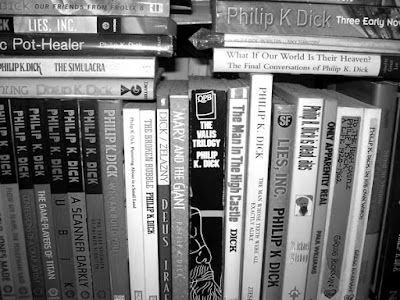 A Wikimedia Commons photo of a Philip K. Dick bookshelf.

Long ago, when my youth burned green and wild with oats (as Dylan Thomas, or a bad parodist of Dylan Thomas, might write) I picked up a sci-fi magazine and read a very short story called “Roog.” The story described a dog’s “paranoid suspicion” against garbage collectors, told from the dog’s point of view,1 and it absolutely juiced my neurons. I felt as if I had just smoked my first pipe of Alamout Black hasheesh (“We taking you higher”) all over again. I felt wigged. I felt as if “illuminated from above.” I felt, in short, that the dog hat talked to me.

Well, that Trip occurred a long time ago—almost forty years ago, I suspect—but I never forgot the name of the author of “Roog” and I never stopped looking for anything else by him in print. In 1978 or ’79 I finally met him—Philip K. Dick in all his beamish and batty beatitude. We both had reached our mid-forties by then, and I think we shared the subterranean tremors that shift male tectonic plates at that age. Specifically, as writers concerned with the “abnormal,” we each wondered sometimes if we had absent-mindedly graduated, somewhere along the line, from whimsy to lunacy. Phil had the persistent notion that, in February 1974, he had made contact with some sort of Higher Intelligence. Of course, as a card-carrying Postmodernist, he never really believed that totally. I had the suspicion that I had also contacted a Higher Intelligence, in July 1973.2 Of course, as an initiated Deconstructionist, I also never believed that totally.

Read the article to learn about the "baffled suspiciousness" of Dick and other writers.

1. The Wikipedia entry for "Roog" shows it was published in the February 1953 issue of The Magazine of Fantasy and Science Fiction. RAW would have been 21 when he read it. F&SF was my favorite SF magazine as a teen and young adult, I had a subscription for awhile, so I'm pleased to know that RAW sometimes read it. The magazine still exists.

2. The first meeting between RAW and PKD, mentioned in the piece Martin posted, apparently was in October 1978 at Octocon II, a science fiction convention in Santa Rosa, Calif.; I investigated for this blog when they  had met. Find out more.