Supergee on 'The Earth Will Shake' 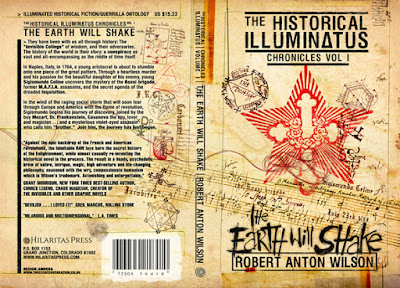 [Continuing the gala celebration over the publication of the Hilaritas Press editions of The Historical Illuminatus books, here's Arthur Hlavaty's review of The Earth Will Shake from "New Libertarian" Volume 4, Number 13 from April 1985. Thank you to Martin Wagner for sharing it with me. and to Mr. Hlavaty for giving me the go-ahead to share this with you. -- The Mgt.]

The Earth Will Shake by Robert Anton Wilson

It has been said that the writings of Robert Anton Wilson encourage paranoia. That's at best an oversimplification, but those who believe it are not entirely mistaken, for two reasons:

1 Wilson's writings encourage new ways of looking at the world, seeing patterns which are not obvious to others, and while this sort of thinking can lead to scientific breakthroughs and brilliant new literary approaches, it is also found in paranoids.

2 The publication history of Wilson's writings, from the five-year delay of Illuminatus! to the present, is enough to raise the possibility of Sinister Forces trying to keep the words from the eyes of the public. (On the other hand, those writings also remind us that we should be wary of blaming on conspiracy that which can more simply and convincingly be attributed to incompetence.)

The work at hand continues that lamentable tradition. The Earth Will Shake was published in hardcover, late in 1982, by J.P. Tarcher. At least, they said they published it. I suspect they released it on a need-to-know basis. Living in a university town, with several good bookstores besides the college bookstore, I never saw a copy for sale and had to go up to New York to purchase it. People all over the country reported similar difficulties. But now, a few months after the announced publication date (of course), there is a paperback edition available. I've seen it.

Is it worth the wait? You bet. Like all of Wilson's prior fiction, alone and in collaboration, it offers the interest of complex ideas, entertainingly worked out. More than that, it represents a major improvement in literary merit. It opens with a stunning scene of a murder at High Mass, in which the images of Transubstantiation and Mystical Presence mix with the physical fact of sudden and violent death. The characters, though similar to those in earlier Wilson books, are more fully developed and rounded than ever before. The scene -- 18th-century Italy, with its complex mazes of theological and Enlightenment speculation, revolutionary movements and conspiracies -- is richly delineated.

My one caveat would be that the book is, as indicated on the cover, the first of a series, and thus is somewhat incomplete and openended. Other than that, I recommend the book unreservedly. -- ADH

Email ThisBlogThis!Share to TwitterShare to FacebookShare to Pinterest
Labels: Martin Wagner, Supergee, The Earth Will Shake