Find the others in Pittsburgh the last weekend of July 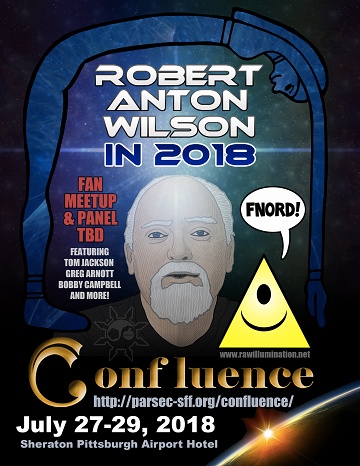 Time to find the others? Here's an update on Confluence, the science fiction convention in Pittsburgh at the end of July, where I can guarantee you'll meet at least three hardcore RAW fans: Bobby Campbell, Greg Arnott and myself. Confluence (July 27-29) [link] is a well-run science fiction convention that has been around for years; the main writer guest of honor, Catherynne Valente, is considered a major figure. I just finished the audiobook of her interesting and unusual novel, Radiance.

I asked the convention if we could have a panel discussion devoted to Robert Anton Wilson, and a few hours in one of the rooms for some RAW programming. My panel request ultimately was rejected. The only official time the convention offered was a slot at 3 p.m. Sunday.

So here are how things are shaking out at this point; much of the RAW programming will be unconnected to the convention, which means that anyone who makes their way to Pittsburgh can take part, without having to buy a convention membership:

Bobby Campbell will have an art show at the convention of his interior illustrations for the new Hilaritas Press editions of the Historical Illuminatus books. It's the only place this year to see the art in North America (please see the flyer below). You will have to have a convention membership to see it and to attend his Sunday talk.

At 4 p.m. Friday, I will interview Prop Anon via Skype about his new biography of Robert Anton Wilson. I'll probably do this from my hotel room, figuring out some way to let people know the room number via Twitter direct message or text message once I find out. Friday night, Greg and I will likely get together for dinner and drinks at some convivial location, and any other RAW fans in town are invited to join us.

I have reserved space from 2 p.m. to 4 p.m. Saturday at the Anchor and Anvil Coffee Bar in Coraopolis (the same town in Pennsylvania where the convention is being held); I plan to give a presentation on Robert Shea, and Bobby Campbell has a couple of presentations he can offer, one on his adventures illustrating "Historical Illuminatus" and one on the Kenneth Noid-Dominos Pizza incident.

Saturday night there will be another gathering, probably in a hotel room, and Greg will give a couple of talks, one on RAW as a magician, and one on how RAW's views on marijuana prophesied the wave of legalization sweeping the country. Sunday will feature Bobby's talk.

There should be other opportunities to get together for coffee, meals, etc. I do plan to attend some convention programming, as time permits.

I had a Skype conference call with Bobby and Greg and they both said lots of interesting things. More than an hour flew by before I had to leave to do my chores (my cat was biting me to remind me it's time for his snack). They've both promised to save some of their best thoughts for Pittsburgh, so if you don't show up, you're fucked. 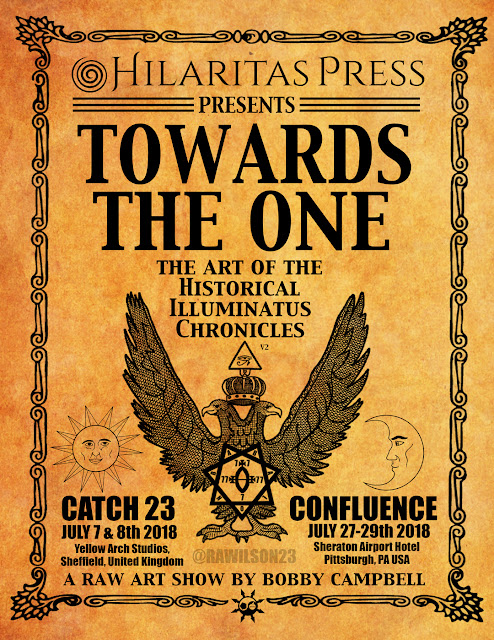 Flyer for Bobby's art show, exclusive (in this hemisphere) to Confluence.
on July 13, 2018

Sounds like a great weekend Tom. Thanks for setting this all up. Unfortunately duty calls and once again I am going to miss out on a RAW gathering.