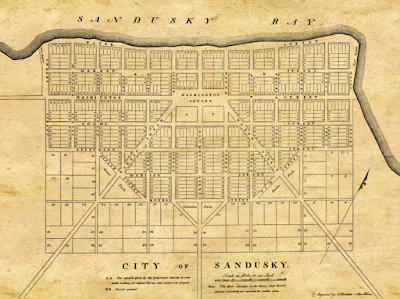 Above is the original plat for the city of Sandusky, Ohio, which is celebrating its 200th anniversary this year. A Freemason named Hector Kilbourne laid out the city streets to reproduce the mason's compass and square design. Masons in Sandusky, where I work for the local newspaper, say Sandusky is the only city in the U.S. with a masonic street design. (More information from Mr. Kilbourne's lodge, which still exists.) 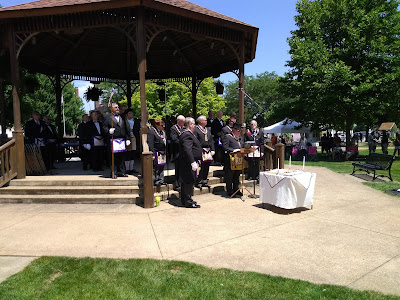 I had to work on Independence Day, covering events in Sandusky. That included the masons from Sandusky's Science Lodge 50 holding a ceremony to dedicate two cornerstones that will mark the 200th anniversary of the city, and their lodge. Ohio Grand Master mason, Rick Schau, a 33rd degree mason from Springfield, is the guy in the top hat.  I snapped a picture.

I talked with the masons after the ceremony, and along with my other questions, I pointed out that Sandusky had early German settlers. I asked if there's any indication that members of the Bavarian Illuminati had settled here. They said they didn't know anything about that.
on July 05, 2018

Very interesting. It reminds me of the analysis of London geography in Alan Moore's From Hell. Speaking of your neck of the woods, I wonder if more people in Cleveland have signed up for HBO with the Browns scheduled to appear on Hard Knocks. I can't wait.

I'm sure there will be a lot of interest, but I won't be tuning in. I've given up football (reluctantly) because of the link between the sport and brain trauma.